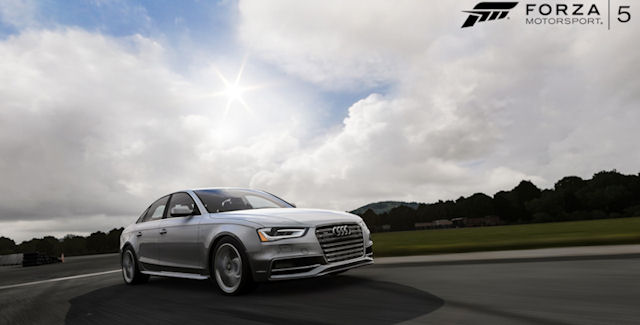 Xbox’s Major Nelson interviews Dan Greenawalt from Forza Motorsport 5 developer Turn 10 Studios about the development for the Xbox One controller’s Impulse Triggers, and how the game gives you extra steering tips through the built-in haptic feedback that the Xbox One-exclusive game uses.

The cars featured in the Limited Edition Car Pack and the Day One Edition Car Pack have been customized with unique Xbox One liveries and feature custom tunes designed by the developers at Turn 10 to improve performance above their stock counterparts. The stock versions of these cars will also be available on disc.

This five-car pack features new cars that are already destined for legendary status. Each car in the Limited Edition Car Pack will feature a Limited Edition livery and will be tuned to the top of its respective class.

• 2011 Audi RS 3 Sportback — More than a mere grocery-getter, the RS 3 Sportback marries performance with practicality. The result is a 340-horsepower grin-generator that will paste your head to the back of the seat and not crack a single egg in the process.
• 2012 Aston Martin Vanquish — As comfortable on the track as it is on cozy country lanes, the Aston Martin Vanquish is equal parts refined style and snarling, road-taming grit.
• 2013 Ford M Shelby Mustang GT500 — While the GT500’s aggressive lines suggest raw power and straight-line speed to spare, the sound of that big 5.8-liter V8 simply screams, “Get out of the way!”
• 2013 McLaren P1 — The successor to McLaren’s legendary F1, the McLaren P1 is an automotive highlight reel: technological innovation, gorgeous contours, and pure, unapologetic performance. Epic, legendary, astounding – words tend to fail when describing this car’s limitless potential.
• 2013 SRT Viper GTS — The return of the Viper has been celebrated by automotive fans worldwide. With an 8.4-liter V10 that’s capable of pushing the GTS to a top speed north of 200 mph, the 2013 Viper GTS has once again firmly entrenched its spot near the top of the American Muscle hierarchy.

• 1965 Shelby Cobra 427 S/C — Marketed as “the fastest streetcar in the world,” the 427 S/C is the most desirable of all the Shelby Cobra variants. Out of the 100 that were planned only 53 were built. They are nothing less than a purpose-built race car converted at the last minute for street use.
• 1987 RUF CTR Yellowbird — Dubbed the “Yellowbird” by journalists during a test drive event, the 1987 RUF CTR Yellowbird earns its name thanks to the canary-like chirping of its twin turbo blow-off valve. Just 29 of these cherished classics were built.
• 1991 Mazda #55 787B — One of the most beloved race cars of all time, the 787B holds the distinction as being Japan’s only winner of a 24 Hours of Le Mans race. Featuring a brash green and orange livery and an unmistakable screaming Wankel rotary engine, the 787B continues to inspire more than 20 years after its debut.
• 2011 Ford F150 SVT Raptor — Say hello to your rear view mirror’s worst nightmare. The Raptor is essentially a factory-built pre-runner race truck with suspension to match its under-the-hood muscle. Slide it, jump it, whatever you like — it just begs for more.
• 2011 Bugatti Veyron Super Sport — Even among hypercars, the Veyron Super Sport stands alone. After all, this is the car that currently holds the Guinness record for “World’s Fastest Car” at speeds approaching 270 mph.

This three-car pack features amazing cars from Lamborghini, Audi, and Ford; each with a Day One-themed livery and custom tuning package.

• 2010 Audi TT RS Coupe — Stuffed stem to stern with modern tech, the TT RS is the first TT model to carry Audi’s famed RS badge — a distinction that’s earned on the track from the moment you step on the gas.
• 2013 Ford Focus ST — Debuting with the same 247-hp 2.0-liter turbocharged EcoBoost engine from the much larger Ford Explorer SUV, the new Ford Focus ST packs a serious punch.
• 2011 Lamborghini Gallardo LP570-4 Superleggera — Like great sculpture, the Superleggera’s chiseled form is carefully considered for maximum impact. That’s where the similarities end, however, because this work of art is best appreciated when it’s moving at top speed.

Microsoft and Turn 10 Studios have announced “Forza Motorsport 5” Car Packs will be released on a monthly basis following the launch of “Forza Motorsport 5”. For the first time ever, every vehicle will be available in Forzavista mode; allowing players to explore every inch of each car… inside and out.

• The LaFerrari Car Pack, available on launch day for Xbox One and “Forza Motorsport 5,” is the first opportunity for fans around the world to enter the cockpit of Ferrari’s long-awaited new hypercar. Powered by an innovative 950-hp hybrid engine and limited to 499 global production units, when released, the LaFerrari will be one of the fastest and rarest cars in the world, and “Forza” fans will get the unique chance to drive the digital experience before anyone else. The pack will also include nine additional cars.

There are no Forza 5 cheats on Xbox One yet (DLC replaced them). We also made the handy Forza 5 guides listed above to help you with tips and tricks for the game!

Do you know of any Forza 5 cheats or unlockables?
Let us know in the comments, you’ll get credit for finding out. – Thanks for visiting!