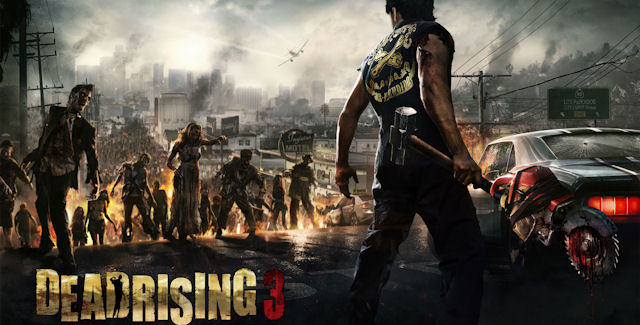 Our Dead Rising 3 walkthrough will guide you through the beginning to ending moments of gameplay with strategy tips for this survival-horror game on the Xbox One.

Nick Ramos was a simple mechanic before the zombie outbreak. Now he’s fixin’ to be humanity’s only hope for survival in the search for a cure.

Please note that viewers must be at least 18 to watch, so no harm comes to those with innocent eyes. This game includes Blood and Gore, Intense Violence, Sexual Content, Strong Language, Use of Alcohol.

Developed exclusively for Xbox One, Dead Rising 3 is the third main installment in the celebrated franchise and introduces a blockbuster open-world action game that will define a new generation of zombie-slaying mayhem. With intense action and an unmatched level of weapon and character customization, Dead Rising 3 delivers a heart-pounding experience unlike any other as you fight for survival in a massive open world teeming with thousands of undead.

Dead Rising 3 marks the return of one of the most popular zombie video game franchises. Set 10 years after the events of Fortune City in Dead Rising 2, players are introduced to Nick Ramos, a young mechanic with a strange tattoo and a mysterious past, who must find a way to escape a city full of zombies before an impending military strike wipes the city of Los Perdidos, California, and everyone in it, off the map. Nick can’t do it alone – he must join up with other survivors to stay alive. They must fight their way out before it’s too late.

Welcome to the Dead Rising 3 walkthrough! Capcom Vancouver’s Josh Bridge, the executive producer on Dead Rising 3, will be your voice-over commentator showing you around the game’s opening areas.

Protip: Before you start playing Dead Rising 3, download the SmartGlass app for the game’s awesome second screen experience! You can get the app for free at the Apple iTunes store for iOS devices, and at the Google Play store for Android devices. — It allows you to connect to the Zombie Defense and Control network for in-game military support, setting waypoints, item finder, and even unlocks extra missions.

Anything and everything is a weapon in Dead Rising 3. Explore the city of Los Perdidos, in California, scavenge for supplies and improvise new weapon combinations as you fight to survive in a massive open world overrun with zombies.

We start at the introduction chapter of the game, which is roughly the first 25 minutes of playtime.

Story Difficulty Mode Tip: Story Mode includes auto-saves and time enough for completion of the story and side content. If you want to do it all, do it in this mode. At any time use Chapter Select to reset your timeline to a Chapter you completed. You’ll keep your character progress, thus making the challenges easier the next time through.

Tip: If you need some help during a fight, bring some survivors to tip the scales for you!

Hint: Stranded survivors are also a great way to earn some fast PP, so keep your eyes open.

Kinect Tip: Make sure you have Kinect turned on for this to work. When a zombie grabs you, you’ll see an Xbox One controller icon appear at the bottom-center of your screen with a red circle around it. When this appears, you can push your Xbox One controller forward to shake the zombie off you quickly! This works, because the Kinect sensor can pick up your motion in case of emergency.

In the first chapter we get to enjoy nearly an hour of zombies, psychos, and tuxedo sharks.

We continue our trip to escape a quarantined Los Perdidos. As the chapter begins, Nick, Dick, and Nick’s boss “meet up” with Nick’s friend Diego who tells them where to find Zombrex. Make your way to the shipping warehouse.

Tip: All Safe Zones have Survivor, Weapon, and Clothing lockers. Visit them if you need to rearm yourself.

Hint: Buy more Inventory Slots from the Attributes Panel in the Survival Guide.

Kinect Tip: With Kinect on, you can attract a zombie’s attention by using an audio lure.

This Dead Rising 3 walkthrough for Xbox One is played on Nightmare Mode, spanning all 6 days of the zombie outbreak until the fire bombing. All Side Missions are completed, along with all the missions from Jamie Flynt from Xbox One Smartglass (Dead Rising 3 Companion App). Rank S Ending and Post-Credits Secret Ending is also included.

Timeline in minutes for the entire game video walkthrough below:

• This playthrough is XCV’s 4th time going through this game. Nick Ramos is upgraded to the maximum level, 50. All abilities are unlocked. Mega Man X outfit and the X-Buster is unlocked, including all Super Combo Weapons and Mobile Locker. The tattered mechanic costume Nick is wearing at the beginning is a special DLC outfit (Battled Hardened Nick Costume) from the Season Pass. Also from the Season Pass is DLC car, Nick’s Muscle Car.

• Nightmare Mode is different from the regular Story Mode in many ways. No checkpoints or auto-saves. Manual saves only. Time drains away four times as fast. Nick and Survivors receive more damage. Enemies and Zombies are more aggressive and withstand more damage. Weapon Lockers and Garages allow half as many items to be generated.
It’s very possible to do EVERYTHING in the game without skipping dialogue or scenes, and still make it, but you cannot mess around — and you MUST know exactly what to do. Knowing how and where to find ingredients to make ‘Repulse’ will make it much easier, as well as unlimited sprint and indestructible vehicles.

• There were one or two stranded survivors I did not save and possibly others I missed, but these guys are not crucial in any way, and serve only to gain PP for rescuing them. Regarding the Xbox One Smartglass Exclusive Missions from Jamie Flynt, you won’t have any idea what is going on because Jamie Flynt is speaking through the app the device is running on. But the missions revolve around basic quests like driving a van somewhere, or hacking a few computers — in the end you get to find out who Jamie Flynt truly is. You also gain access to areas you otherwise would not be able to, in addition to secret stashes. The Dead Rising 3 Companion App lets you also call down Airstrikes, Gunstrikes, and Flares, and also call your Survivors for backup without being at a Safe Zone. That is the reason why I seem idle at certain times — because I am messing around with the app. You can check out an Airstrike at: 1:17:29

Thanks to Microsoft, IGN, Gametrailers & XCV for the walkthrough videos.