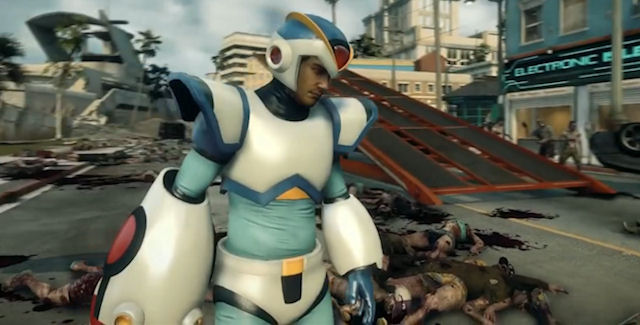 How to get the Mega Man X costume and X-Buster gun:

• The functional Mega Ma X costume can be unlocked by completing the game on Nightmare Mode. — This is similar to how Mega Man was unlocked in Dead Rising 1.

The official Nightmare Mode description already hinted at this: “Your time is limited to finish your mission and be prepared to face tougher Zombies. Checkpointing is disabled and you need to visit the bathroom to save your progress. Prepare to die, prepare to start over – this is your classic Dead Rising mode. — If you beat the game in Nightmare difficulty, you might get a neat surprise.”

How To Command Your Team & Taunt Your Friends with Kinect

Sense the danger with the new Kinect sensor that comes with every Xbox One console:

• Method #1. Use Kinect’s motion controls to point and command your survivor posse and even yell insults to taunt your enemies.
• Method #2. With Kinect’s microphones, the zombie horde can hear beyond the screen and will react to you calling out for a more immersive experience. — Taunt anyone who’s playing by shouting loudly “WATCH OUT FOR THAT HORDE OF ZOMBIES!”, the sound of which will then attract the zombies from a distance! 😛

• Where to download the SmartGlass app? You can get it right now at the Apple iTunes store for iOS devices, and at the Google Play store for Android devices.
• Use your SmartGlass enabled device to connect to the Zombie Defense and Control network and gain access to exclusive missions,
new weapons & items, plus powerful military support features like Airstrikes, Drone Strikes, Flares and more!
• USB sticks that contain details for a hint-providing app or new ringtones and wallpapers for SmartGlass are hidden throughout Dead Rising 3’s world.

This video guide shows exactly how the SmartGlass app works with Dead Rising 3 offering exclusive (yet optional) missions and gameplay:

See the Airstrike in action 11 minutes into this demonstration video:

What the 4 DLC Packs in the Dead Rising 3 Season Pass Unlock:

All 4 episodes of the Untold Stories of Los Perdidos include over 20 additional weapons, 4 new vehicles, and 4 all-new playable characters with brand new stories and missions. Experience the outbreak as an anarchist biker, an illegally infected survivor, a ZDC government agent or a classified military operative.

Additionally, with the purchase of the “Dead Rising 3” Season Pass, you’ll receive the immediately-available bonus “Nick Ramos Tribute Pack,” which is similar to the Tribute Packs being offered in the Day One edition of the game. The “Nick Ramos Tribute Pack” allows you to taunt death in a custom muscle car designed for the hardened zombie killer and show off your survival scars with the battle-hardened Nick Ramos costume.

There are no other Dead Rising 3 cheats on Xbox One yet. So until more are discovered, we made the handy Dead Rising 3 guides listed above to help you with tips and tricks for the game!

Do you know of any Dead Rising 3 cheats or unlockables?
Let us know in the comments, you’ll get credit for finding out. – Thanks for visiting!