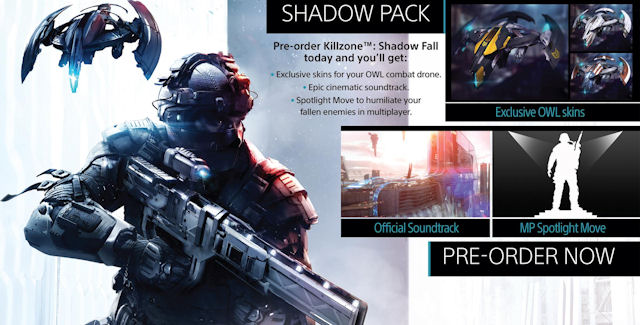 Pre-order Killzone: Shadow Fall at participating retailers (such as Amazon) to receive the free Shadow Pack DLC. This downloadable bundle of exclusive content gives you access to these extras:

• OWL Skin: Give your OWL combat drone a unique appearance with these exclusive skins. Who says combat drones need to be devoid of personality?
• Multiplayer Spotlight Move: Celebrate your triumphs over enemy players in multiplayer mode in a new and unique way with this special victory move.
• Official Soundtrack: Listen to the epic cinematic score for Killzone: Shadow Fall as it brings both sides of the conflict to life like never before.

This video shows the OWL in action:

Do you know of any Killzone: Shadow Fall cheats or unlockables?
Let us know in the comments, you’ll get credit for finding out. – Thanks for visiting!