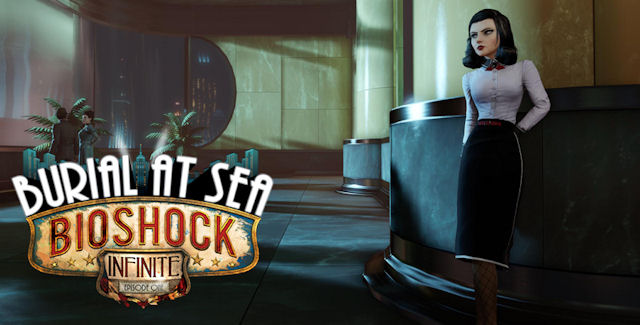 The BioShock Infinite: Burial at Sea trophies guide lists every trophy for this PS3 first-person shooter game DLC and tells you how to get and unlock them.

There are 10 Trophies (3 Hidden) that can be earned in the PS3 version. Earn Bronze (7) and Silver (3) Trophies to increase your Gamer Level.

1. Audio Enthusiast (Silver) — Collected all Audio Diaries in Burial at Sea – Episode One.

2. Fully Equipped (Bronze) — Purchased any two upgrade for Old Man Winter or Radar Range in Burial at Sea – Episode One.

It’s recommended you start by upgrading the new plasmid “Old Man Winter” first as you get it in the second area of the DLC, while the new “Radar Range” weapon will only be available on the third area of the game.

You must destroy 10 turrets during your playthrough. This video shows you what a turret looks like. If you missed a turret you can always reload chapter via the main menu and select the area “Arrived at Fontaine’s station”. Another way is to find a turret, destroy it and reload checkpoint, destroy it again and it will count towards the Trophy.

The Radar Range is a new weapon that can be found in the third area of the DLC: the Bistro. Head downstairs and after using the code 3958 to open the door the weapon is yours. Now all you have to do is shoot 5 enemies and shoot them until they turn red and about to explode.
The easiest way to get this achievement is to sneak up behind a group of enemies, shoot one (hold the right trigger button) and let him explodes, damaging/hurting the enemies around.
Another way to do this easily, is to run around until a few enemies are chasing you, then turn around and shoot one of them (hold right trigger), this will cause the blast to damage/kill other enemies around.

6. Break the Ice (Bronze) — Shattered 5 enemies who had been frozen with Old Man Winter.

As soon as you get the the new Plasmid called “Old Man Winter”, Elizabeth will notify you about a group of enemy. To set up a trap, you must hold the left trigger for a few seconds and aim where to place your trap.

8. Down in the Briney (Bronze) — Took a Bathysphere ride in Burial at Sea – Episode One.

Special thanks to 2K Games & TrecenaTV for the guide videos & tips.

Please comment if you have any BioShock Infinite: Burial at Sea trophy unlock tips of your own. Kudos will be given. – Thanks for visiting!