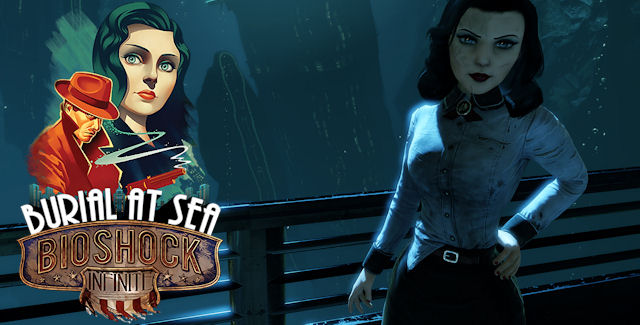 This video shows the BioShock Infinite: Burial at Sea ending when it’s played on any difficulty and shows what happens after Booker and Elizabeth find the missing girl Sally in Rapture.

This Episode 1 ending will be continued in “BioShock Infinite: Burial at Sea – Episode 2” in 2014.

Here’s what BioShock Infinite: Burial at Sea designer Ken Levine has to say about the ending:

“The trouble of explaining anything when you start to cover off the mechanics is that the true linear understanding of events gets very, very, very complicated. Chronology gets very, very complicated. As Einstein says, ‘The only reason for time is so that everything doesn’t happen at once’. It’s a way we perceive something. Elizabeth has a demonstrated ability to be able to see behind and access all of the doors. She’s capable of existing in any reality.

You look at the journey of Elizabeth from the girl you met in the tower to the woman standing in front of you at the end of this, with Comstock’s blood all over her face. That’s a very different person who has been changed by events. To me the question is – what has Elizabeth just done? What kind of person has she become and where is she going? She’s concocted this scheme to have Comstock murdered while at the same time nearly burning a little child, leaving Sally to her fate.

Where does Elizabeth go from there? How does she react to what she’s done, when she has time to think about it? That’s what is interesting to me – watching the character evolve over time, change from one person to another due to events. You tell me – I don’t think she’s going to just wake up the next day and it feel like Animal Crossing from now on. There’s nothing wrong with Animal Crossing. But the story will continue from there.”

This ties into “Burial at Sea” being Elizabeth’s story all along, and she will take over the narrative completely as she’s the playable character in Episode 2!

Important: If you’re going to talk about the game’s ending in the comments section, please put a big fat “SPOILER ALERT” warning text as the first two words before typing your comment. Since comments are highlighted site-wide, and obviously some of us haven’t finished the game and would like to be surprised. 🙂

What do you think of the BioShock Infinite: Burial at Sea ending?