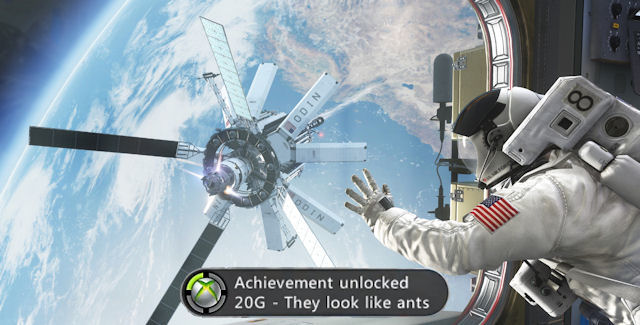 The Call of Duty Ghosts achievements guide lists every achievement for this Xbox 360, Xbox One & PC first-person shooter game and tells you how to get and unlock them.

There are 50 Achievements (9 Secret) with a total of 1,000 Gamerscore points to earn in the Xbox 360, Xbox One and PC versions.

After defeating the enemies at the gas station, you will have to fight your way through an old sewer. When you reach the end of this area, you will be attacked by two helicopters. The first (smaller) helicopter will fly away after a moment, so take it down quickly! There are several MAAWS rocket launchers on some crates. Get one of them and when shooting, you must keep aiming at your target to guide the missile. Shoot down both helicopters using the rocket launcher to unlock this achievement.

8. Waste Not (10G) — Every shot with the remote sniper kills a person or vehicle.

During this mission, you are asked to use the remote sniper multiple times. To get the achievement, you must make sure that you don’t miss any shots. There will be a total of 4 remote sniper sections throughout the mission. Just make sure you are aiming a stationary enemies, and never shoot if you aren’t confident. — Once the mission ends, the achievement will unlock.

During the mission, the city will flood and then you will be prompted to kill an enemy using a knife. Before you kill them, make sure that you are underwater. Moving on in the mission, you’ll come to an area with some wreckage, where you should be able to sneak to the back and kill at least two enemies using the knife underwater. Lastly, you come to a parking garage, where you should sprint to the back as fast as possible, and knife at least 3 enemies underwater. If there are only 2, just wait, and another enemy should jump into the water. — The achievement unlocks once you knife the 6th person.

During your 2nd rappel section, where you scale the side of the building and kill two enemies on a balcony, you’ll want to keep your eyes open for a sleeping enemy inside one of the windows directly in front of you. He will be inside the building about 1-2 stories lower than the balcony. — As soon as you shoot him the achievement unlocks.

15. Carbon Faceprint (10G) — Catch the photocopier with your face.

Funny description once you know what happens, haha!
During the final rappel section, which takes place after defending yourself against some enemies, and enemy will throw a photocopier outside of the window. Make sure you just sit there, in the middle, and let it hit you. — It shouldn’t kill you and you will unlock the achievement once it hits you.

Look for the very large fuel containers found all across the tops of buildings and on bridges. There’s over a 120 of them in this Mission, so shooting 80 with the helicopter’s machine gun should be easy enough.

This video guide shows the ideal path to help you stay in stealth.

You can get a “vehicle drop” by shooting with the turret right in front of the vehicle’s front tires, the following explosion will cause the vehicle to crash or roll-over into the newly created ice hole. If you do this in the second half of the mission after the exfil timer appears, you’re told by Merrick to “Shoot the ice!”, which is your cue.

Move the left analog stick up or down to counter the three pressure bars’ movement from going into the red. For 13 seconds your goal is to keep them in the green.

24. Piece of cake (100G) — Storm the common room and kill everyone without taking damage on Veteran.

This is one of the most difficult achievement, so here are Maka’s tips:
During the mission, you will come to a room that you must breach, and your ally will push you away from the explosion. This is the room where the achievement takes place. Make sure that you keep all your grenades and flash bangs for this section, and I recommend using any weapon with a red dot sight. Once you get up from the explosion, cook a flash bang and throw it into the middle of the room. When it goes off sprint behind the counter directly in front of you. If you’re fast enough, you can get away with firing some bullets and killing 1-2 enemies before going prone behind the counter. Once prone, throw another flashbang into the middle of the room. You should be able to go crouch and see where the enemies are. Throw a grenade into each corner of the room and that should take out most of the enemies. Now you can try and wait until you allies take out a few more enemies before slowing poking your head out an trying to kill any remaining enemies in the back. If you “push up” but stay behind cover, your allies will also move up and hopefully clear out the enemies. If at any point you get hit, which is indicated by a red blink on your screen, press pause and restart the checkpoint.

The achievement will unlock when the final enemy is killed and the ally says “All Clear!”

28. Cog in the machine (35G) — Kill 5 enemies without being detected before infiltrating Black Zone.

Location: Mission 13: End of the Line

You can stealth kill the first 4 enemies by shooting them from behind (or if you can get close with a knife kill). The 5th enemy you’ll get to when you progress through the Mission where Keegan tells you “Logan and I have the right side handled”. Then immediately go to the right side and look through the window where you see a soldier standing in wait behind a closer door, since you can clearly see him shoot him in the head for your 5th kill, but do it quickly before your teammate opens that door!

Once you’ve killed all the enemies at the bottom of a large staircase, you’ll be at the casino section. Shoot out the monitor screens of 20 of the slot machines to destroy them (and get the so-called Jackpot achievement). But because there are only 20 slot machines in the casino room, continue the level under the door and stop before going down the escalator in the next room, then look straight forward across the hall to see the last handful of slot machines that you can shoot at from a distance. — The achievement unlocks once you destroy the 21st slot machine.

Location: Mission 15: All or Nothing

This can be done at the part of the Mission where Command tells you that “All squads, we have incoming Federation zodiacs to the north.” Go to the side of the ship where the on-screen target indicator says “Defend” and wait for the enemies to climb the ship. When you see a brown rope hanging over the side-railing go stand next to it and you’ll get the “Press to cut rope” action command. Cut all the grappling hook ropes you see hanging on the railing and you’ll eventually cut one with an enemy hanging on it, which will unlock the achievement.

This can be done once you reach the airstrip. Ignore the incoming Federation tanks and focus on the air. Once Command says “B-Company you have enemy helos inbound!” you can stop your tank and immediately switch to guided rounds to take out the 3 helicopters in front of you.

36. They look like ants (20G) — Destroy all enemy ground targets and kill no allies with the rods.

Once you get to fire rockets to Earth from space, you’ll need to make sure to only hit yellow/red “X” targets (the enemies), and to NOT hit any blue “cross” targets (which are allies). As you’re firing rockets at the enemies make sure to keep your distance from the allied troops next to them, because the rockets do give a bit of splash damage on impact.
Note: When you hear “Thompson, make sure your shots are on target” means that you have accidentally hit an ally and must immediately restart the checkpoint if you want this achievement!

Tip: To find all 18, check out our Call of Duty Ghosts Rorke Files Locations Guide.

Tip: Find out how to unlock the Secret Achievements in our Call of Duty Ghosts: Extinction Guide.

43. Sprinter (20G) — Reach the exfil chopper with 1 minute and 30 seconds or more remaining on the clock.

48. Any Means necessary (40G) — Get 50 kills with the electric fence and fire traps in a single game.

Special thanks to Tom, Maka, IntimidateGaming & Powerpyx for the tips & guide videos.

Please comment if you have any Call of Duty Ghosts achievement unlock tips of your own. Kudos will be given. – Thanks for visiting!