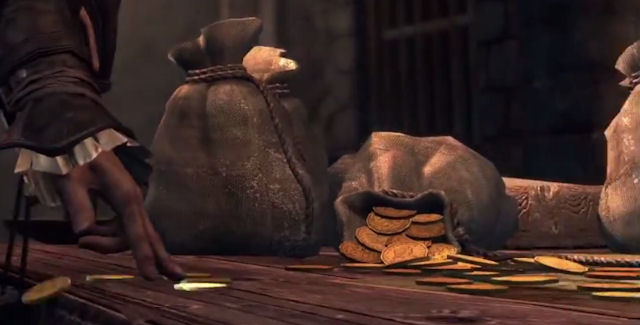 This Assassin’s Creed 4 money cheat will show you how to collect quick cash by taking advantage of easy money tips to increase your Reales count in the PS3, Xbox 360, Wii U, PC, Xbox One & PS4 versions of the action-adventure game.

Essentially it’s an unlimited money method. Here we show you how to easily farm money in Assassin’s Creed 4. Need a little spare change to buy upgrades, weapons, art, new clothing and ammo? Check out these Assassin’s Creed 4 tips that help you multiply your Reales quickly.

STEP 1: This only works once you get up to Sequence 2 Memory 3 in the story mode, then you can keep on doing it.

STEP 2: Play Sequence 2 Memory 3, until you get to the “Pickpocket All Templars” optional objective with the 3 Templars standing around a table and pickpocket them as instructed.

STEP 3: Right after you’ve stolen the Templars money, around when the old man says that he’ll be waiting for you, go to “Reload Last Checkpoint” so you end up back in time to before you stole their money. But now they have their money again, yet your total Reales is still higher! Which means you can pickpocket them AGAIN!

STEP 4: Now repeat the previous steps over and over until you have enough money, when you’re done EXIT the Sequence, and then EXIT the game to the Main Menu! That way the game will save the money you collected. In 7 minutes time you can earn over 35,000 Reales! 😀
This allows you to get the “Business And Pleasure” achievement/trophy fast for earning 50,000 Reales, and at the same time you’ll be able to buy all available upgrades, weapons & more early on in the game!

Here’s the guide showing you how to do the Assassin’s Creed 4 money cheat.

Warning: If you have updated your game at startup to the latest patch update, then it’s likely Ubisoft has already removed this money cheat in your copy of the game. — If you do not want this handy money cheat removed, the solution is simple… for the time being (until you have enough money) do not update your game. So when it asks you to update to the latest version with a patch say no and do it later (since I imagine there might glitches they are fixing as well, so skip the patch at your own risk, but I think we can all agree companies need to start shipping finished games again).

Credits for the discovery go to Deathmule & David S.

If you have any more Assassin’s Creed 4 money cheats or tips, please leave a comment and we’ll add it to this guide with credit to you. 🙂