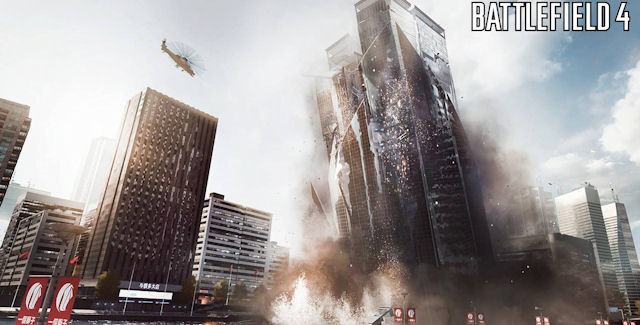 Finish the Singleplayer Campaign to unlock these weapons for use in Battlefield 4:

Tip: 16 Hidden Weapons can also be found in the Singleplayer Campaign, find them all using our Battlefield 4 Weapons Locations Guide!

How To Execute Map Levolutions

On the Multiplayer Maps there are secret locations where you can execute map “Levolutions” events, which is a fancy way of saying that by blowing up certain locations you can execute a completely map-specific landscape-changing effect! Awesome!

Levolution in BF4 delivers a dynamic battlefield, thanks to the Frostbite 3 engine, that reacts to the player’s every move to ensures that no two games will ever be the same. Take a look at the official video here:

Here are all the Battlefield 4 Levolutions split per Multiplayer Map name:

• Dawnbreaker Map: Locate two valves beneath the central avenue of the map, then interact with them to maximize the pressure in the pipelines that run along the street. This causes the pipelines to explode, which will destroy the bridge.

• Flood Zone Map: The large level can be destroyed by using explosive weapons or rockets on the large crack, flooding the streets. This renders a battle pickup and certain routes inaccessible, but also opens up others as well as allowing for the use of amphibious vehicles.

• Golmud Railway Map: The IED’s located throughout the map can be detonated by locating and using control consoles, or simply using explosive weapons. When they explode, the IED’s will leave large craters which alter the landscape.

• Hainan Resort Map: The oil spills can be set ablaze using explosives and flammables in order to burn down both wings of the central hotel. In addition to rendering those portions of the hotel inaccessible, the thick smoke will also serve to reduce visibility which can be handy.

• Lancang Dam Map: The dam itself can be broken by using rockets and explosives on the large crack, forcing large debris to fall to the ground and naturally altering the landscape around it. The resulting damage will disable the electricity in the area as well as reduce visibility. Note however that this will also disable a battle pickup.

• Operation Locker Map: Opponents can be trapped within the prison by locking them within the gates; what’s more, a nearby tower can be made to fall on them by hitting it with enough explosives. Keep in mind that destroying the tower also renders the routes and weapons it typically provides inaccessible for the duration of the match, and players outside of the prison must still deal with a raging snowstorm which periodically reduces visibility.

• Paracel Storm Map: The intensifying storm that lasts throughout the match will occasionally cause a wind turbine to be struck by lighting, destroying it. This in turn forces the large US destroyer ship crashing ashore, altering the landscape around the crash site. However this opens access to the ship’s AA weapons as well as a new battle pickup, but keep in mind that the storm will continue to reduce visibility as well as make the waves more treacherous to navigate for players who take to the seas.

• Rogue Transmission Map: The large radio telescope receiver can be sent crashing into the dish below by destroying the cables that support it. This obviously changes the map where the dish was, as well as disabling the vehicle spawn for the duration of the match.

• Siege of Shanghai Map: This is probably the most famous of all the Levolutions. Destroying the support structures of the central skyscraper using explosive weapons will force it to collapse in spectacular fashion, dramatically altering the landscape surrounding it to the point of shifting the position of a capture point. Meanwhile the bollards on the bridges leading to the tower can be raised and lowered, hampering access to it via vehicles.

Tip: To destroy the Skyscraper, bring down the 4 pillars with explosives. Also, the C flag does not disappear. It’s just moves position.

• Zavod 311 Map: Trigger the timer within the central building to set off a large warhead that takes the smokestack with it when it explodes. This contaminates the area where the explosion takes place with harmful radiation, not to mention making it inaccessible for vehicles.

Until more Battlefield 4 cheats are discovered on PS3, Xbox 360, PC, PS4 & Xbox One, we made the handy Battlefield 4 guides listed above to help you with tips and tricks for the game!

Do you know of any Battlefield 4 cheats or unlockables?
Let us know in the comments, you’ll get credit for finding out. – Thanks for visiting!