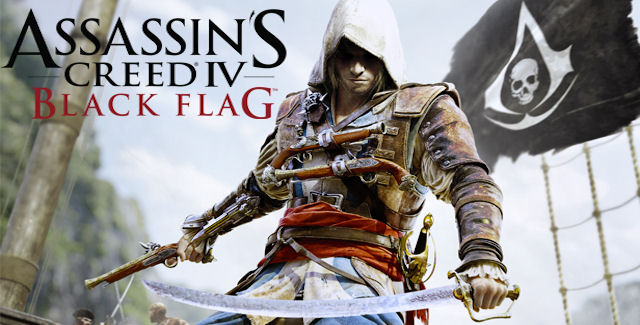 Our Assassin’s Creed 4 walkthrough will guide you through the beginning to ending moments of gameplay with strategy tips for this Action-Adventure on the Xbox 360, PS3, Wii U, PC, PS4 & Xbox One.

Assassin’s Creed 4 is the largest and most immersive Assassin’s game ever created. See how Edward Kenway takes on the Golden Age of Pirates, and meet the outlaw characters that defined this unforgettable era. Experience the breadth of this open-world, including enhanced naval gameplay, expansive new environments, exotic animals and the vibrant underwater world. And learn more about new combat features and weapons, including dual-sword attacks, multi-gun abilities and the free-aim system.

Let’s start the Assassin’s Creed 4 walkthrough with an intro video with developer commentary!

Please note that viewers must be at least 18 to watch, so no harm comes to those with innocent eyes. This game includes Blood, Sexual Themes, Strong Language, Use of Alcohol, Violence.

It is 1715. Pirates rule the Caribbean and have established a lawless pirate republic. Among these outlaws is a fearsome young captain named Edward Kenway. His exploits earn the respect of pirate legends like Blackbeard, but draw him into an ancient war that may destroy everything the pirates have built.

“I once sailed for a king. I obeyed men of privilege and wealth. Now, I bend my knee to no man. My only oath is to my crew and together we will take back what is rightfully ours. With blood and steel, we shall stand up to the powerful. Captains will curse our flag, and kings will fear it. As long as empires generate wealth and riches, we will be there to bleed them dry.”

How does the Animus work without Desmond?

How does the Animus work now that we’re using it as someone without a DNA link to the assassin we’re playing as? The answer lies in the new Animus Omega, powered by Desmond’s DNA which has been ‘synced to the cloud’. Assassin’s Creed IV lead writer Darby McDevitt explains, and fills us in on ‘Abstergo Entertainment’, the entertainment arm of the Machiavellian Templar organisation.

What are the new locations and activities?

Game Director Ashraf Ismail takes us on a tour of the Caribbean and its many locations to explore. Tavern fights, underwater shipwrecks, harpooning, smuggler’s caves… have a closer look at some of the new activities that await you in the endless open world of Assassin’s Creed IV Black Flag!

What’s been improved about the stealth abilities?

In Assassin’s Creed IV Black Flag stealth gameplay is back and better than ever! Rely on your stealth abilities using new techniques such as improved Eagle Vision and all new stealth weapons including The Blowpipe, equipped with berserk and sleep darts, to hunt down enemies.

Is it possible to make the Assassin’s Creed hidden blade for real?

Master swordsmith Tony Swatton forges your favorite weapons from video games, movies, and television. This time, he tackles the hidden blade from Assassin’s Creed in time for the new release of Assassin’s Creed 4.

Sequence 1 – Prologue recap: …in which our Hero, the notorious Pirate, Edward Kenway, acquired for himself a Disguise and a Purpose: the Deliverance of a Letter, Maps, and a strange Crystal Cube to the Governor of Havana, in exchange for a perceived reward; — here too was a Merchant named Stede Bonnet befriended; — paired up, the two set sail for the Spanish Capital, Havana.

Welcome to the Assassin’s Creed 4 walkthrough! XCV will be your expert guide showing you around the game’s areas with maximum efficiency.

Memory 1 “Edward Kenway” Objective: Edward has found himself in a bit of trouble. His only aim is to survive, against all odds and all attacks.

Assassin’s Creed 4 Walkthrough continues on Page 2 with Sequence 2: Good While It Lasted.