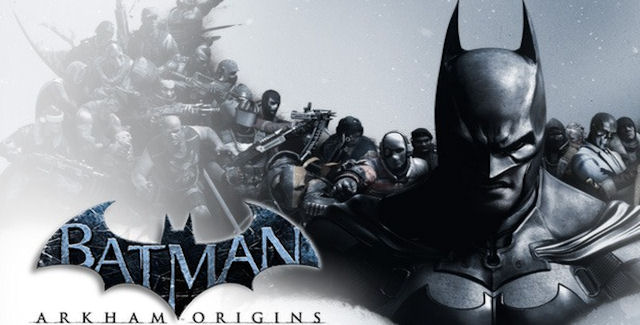 Our Batman Arkham Origins walkthrough will guide you through the beginning to ending moments of gameplay with strategy tips for this action-adventure on the PS3, Xbox 360, PC & Wii U.

…In this video Senior Producer Ben Mattes and Gameplay Director Michael McIntyre walk you through the Batcave and the GCPD at the start of the game.

Please note that viewers must be at least ages 13-16 to watch, in America & Europe respectively, so no harm comes to those with innocent eyes. This game includes Blood, Drug Reference, Language, Mild Suggestive Themes, Violence.

Taking place before the rise of Gotham City’s most dangerous criminals, vile villains and assassins, players will meet many important characters for the first time.

You’ve hidden in the shadows and tied enemies to the ceiling beams in Batman: Arkham Asylum. You’ve leapt from the rooftops and put fear into the hearts of criminals in Batman: Arkham City. Now see how The Batman earned his reputation and started his one-man war on the criminals of Gotham City in Batman: Arkham Origins. Taking place before Batman: Arkham Asylum, this prequel will feature Batman meeting many of his greatest enemies for the very first time. It’s going to be less handshaking and more flying Batarangs and bullets. You’ll also see some new faces among Batman’s rogues gallery, including the creepy and incredibly malicious Black Mask.

The game showcases a young, raw, unrefined Batman as he faces a defining moment in his early career as a crime fighter that sets his path to becoming the Dark Knight. As the story unfolds, witness identities being formed and key relationships being forged.

Batman: Arkham Origins tells the tale of a young Batman facing a deadly challenge one Christmas Eve, years before the events of Batman: Arkham Asylum and Arkham City. The dastardly Black Mask has hired eight assassins to take out Batman, and it’s up to you to take them out first.

Offering the largest city in any Arkham game to date, you’ll explore the sprawling streets of Gotham, battling gangs of vicious criminals and protecting citizens, all while try to track down and defeat Black Mask’s assassins. The series’ FreeFlow Combat experience is expanded with every new opponent as your skills adapt with each battle.

Batman: Arkham Origins introduces multiplayer to the series for the first time!

Offering unique 3 vs 3 vs 2 online matches, you’ll have the chance to play as Batman & Robin vs two rival gangs led by Bane and the Joker.

Who are the main characters and assassin’s in Batman: Arkham Origins?

• Batman AKA Bruce Wayne
Known in Gotham City only as an Anonymous Vigilante. Conflicting reports of the suspect range from a highly trained individual or group of individuals, to allegations of a “large winged creature.” Sporadic sightings were first reported two years ago, though frequency of sightings is up 80% in last six months. Limited photographic and forensic evidence suggests a single individual – a white male adult – utilizing a dark, militarized armor with unexplained high mobility.
Various statements indicate the suspect is armed with hi-tech weaponry and tools, which may allow for rapid deployment and navigation between buildings. Unsubstantiated claims indicate the suspect employs unlicensed low-flying aircraft.
Multiple outstanding warrants for “The Batman” exist, including: assault with a deadly weapon against both criminals and law enforcement officers, breaking and entering, carrying a concealed weapon, interfering with a crime scene, and fleeing the scene of a crime. Considered armed and extremely dangerous. Multiple cases of resisting arrest have proven suspect both an expert hand-to-hand combatant and evasion specialist.

• Black Mask AKA Roman Sionis
Gotham City business owner Roman Sionis is alleged to be one of the city’s most powerful crime lords, though no convictions have ever been made. Sionis maintains several “legitimate” businesses – many of which are believed to be fronts for illegal operations. Notable businesses in his portfolio include: Janus Cosmetics, Gotham Merchants’ Bank, and the now-defunct Sionis Steel Works. Sionis has been charged with embezzling city funds, murder, racketeering, distribution of illegal narcotics, and other offenses, but never convicted. In previous trials, witnesses for the prosecution have been known to recant, die, or disappear. Investigation is ongoing.

• Deathstroke AKA Slade Wilson (Assassin)
FBI files link Slade Wilson to the assassination of various offshore dictators and business people. Less is known about his domestic activities. Additional skills include: Weapons expert. Demolitions expert. Close quarters combat. Ambush techniques.
Following his military service, Wilson worked for various private military contractors before striking out on his own – and allegedly becoming one of the highest paid contract killers in the world, specializing in high profile assassinations.
CONFIRMED METAHUMAN STATUS – experimental speed and strength enhancements of unknown origin. Suspect should be assumed to be armed with multiple weapons, and considered expert with edged weapons, firearms and explosives. Distinguishing characteristics include an impaired right eye, graying hair, and orange accented black body armor.

• Bane (Assassin)
The fugitive known as “Bane” is currently on the run and wanted by the sovereign government of Santa Prisca following a prison break from Pena Duro penitentiary. While no records have been found to substantiate this, rumors allege Bane was born and raised within the prison walls. Bane is believed to be travelling with a large group of mercenaries who refer to themselves only as “Followers”.
Bane is rumored to have larger-than-normal size and extraordinary strength – though this is believed to be as a result of his abuse of performance enhancing drugs. Witnesses report observing temporary changes in musculature and bone structure in certain circumstances, but without physical proof this is regarded as unreliable testimony.
Individual is deemed extremely dangerous – and as cunning as he is physically strong. While he is often armed, his extreme physical strength is considered a deadly weapon even when he is unarmed.

• Deadshot AKA Floyd Lawton (Assassin)
Prior to his dishonorable discharge, Lawton received “Expert” level Army Marksmanship Qualification Badges in all AR670-1 weapon categories. Academy instructors remarked that he didn’t find directly hitting targets a challenge and has a tendency to insert his own additional requirements in order to “make things interesting”.
Little is known about Lawton since his discharge, though he is a suspect in connection with several murders and assassinations, all of which involved uniquely complex ballistic scenarios at long range.
Federal and Interpol warrants have been issued but never served, and Federal warrants alternate between valid and rescinded. Lawton should be considered armed and extremely dangerous. Known for high-risk tactics to decrease his survivability and increase difficulty of any task at hand. It is highly likely that Lawton harbors a death wish – consider this when engaging the suspect.

• Copperhead (Assassin)
“Copperhead” is a possible group identity or floating moniker.
Initial reports of a contract killer using the name “Copperhead” have appeared in various South American Criminal Databases. Reports were, however, inconsistent: conflicting intelligence suggests “Copperhead” may be a pair or even a group of individuals, both male and female, operating under the pseudonym. Analysts suggest Guatemala is the center of operations of this identity.
Consistent elements include snake-themed tattoo markings, and non-restrictive garment to aid with agility. At least two known suspects have been known to avoid wearing footwear.
Some elements are consistent across all reports, and will be represented here. All reports indicate the killer is highly mobile, with an extremely flexible physiology. Case detectives suggest that the individual uses this ability to gain access to structures via small accessways, vents, and construction imperfections. Attributed killings are consistently either asphyxiation, fracture of the cervical vertebrae, or death through the application of exotic poisons.

• Firefly AKA Garfield Lynns (Assassin)
Unstable, erratic individual with advanced weaponry and demolition skills. Lynns is equipped with a military-grade flamethrower and custom light assembly acquired from an unascertained source. Has been alleged to steal chemical materials in bulk – aviation fuels, various chemical primers, and restricted reagents that suggest a specific chemical requirement for both the flight fuels and his incinerator device.
His source files denote extensive psychological issues. Top level summary is that Lynns displays a total disregard for his well being at a level that would be classified as irrational. Extreme disregard for his own safety – this has caused or is symptomatic of the degree of burns he has suffered across his entire body. Training in pyrotechnics means that Lynns is skilled in the construction of incendiary devices, both handheld “pipebomb” size and large-scale demolition level charges.

• The Penguin AKA Oswald Chesterfield Cobblepot
Initially affiliated with various street gangs and suspected of opportunistic fencing, Cobblepot is now believed to be the mastermind of an underground arms trade business. Additional alleged illegal businesses include a city-wide gambling ring, international arms smuggling, racketeering, and murder. Recent rumors also have him running an underground, unlicensed fighting ring. Several warrants exist for Cobblepot’s arrest, but he has never been served, due to a highly secretive off-the-grid lifestyle. Cobblepot’s name is not on the lease for any of his businesses, he owns no property, and pays no bills in his own name.
Of note: The only transaction Cobblepot has been officially associated with was the purchase of the Final Offer, an aging Somaliland-registered freighter believed to operate in U.S. waters.

• Alberto Falcone
Black sheep of the well-known Falcone family; medical records indicate a history of mental instability. Extent of his involvement in the family’s alleged criminal activities is unknown. Psychological records curated by Blackgate psychologist Hugo Strange suggest Falcone suffers from dissociative identity disorder. Though not currently under active investigation, the department psychologist has issued mental health warnings: it’s only a matter of time before he snaps.

Welcome to the Batman Arkham Origins walkthrough! XCV will be your expert guide showing you around the game’s areas with maximum efficiency.

This first chapter includes the “boss fights” against the first two Assassin, namely Killer Croc and the Electrocutioner. It seems the Croc is always out for a kill!

The second chapter is fittingly titled “The Final Offer”.

Combat Tip: Improve your combat grade and earn XP Bonuses in combat by chaining together large combos or by using a variety of different moves in one combo.

In the third chapter we get to do the much-anticipated Deathstroke boss fight! He really wants that prize money.
Extra coverage in this chapter includes: Anarky (Most Wanted).

Deathstroke Boss Fight Tip: Countering too soon against Deathstroke’s counterattacks will f ail your counter. Watch carefully for your opening.

The fourth chapter takes us to the Lacey Towers. Time to do some detective work, here’s where watching all your procedural crime shows finally pays off!

In the fifth chapter we sneak into the GCPD Police Station. Since we don’t have allies on the inside yet, this requires stealth movement throughout.