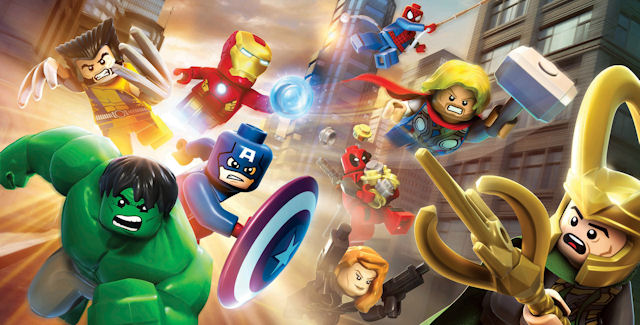 How to enter all cheats into the game is shown in this video guide:

Take a look at the complete cheats list below…

The Xbox 360 and PS3 versions of Lego Marvel Super Heroes are the only ones that get downloadable content (DLC) right away.

• The Thor: The Dark World Pack DLC is available for everyone at launch as a paid download, although it may become available as a paid download at a later time.
It includes: 8 new playable characters from Marvel’s latest Asgard movie Thor: The Dark World, they are Jane Foster, Malekith the Accursed, Odin, Heimdall, Lady Sif, Volstagg, Fandral, and Hogun.

Hogun the Grim, Fandral the Dashing and Volstagg the Lion of Asgard

• The Super Pack DLC is available for free for those who pre-order the game at GameStop & EB Games.
It includes: 8 new playable characters A-Bomb, Beta Ray Bill, Dark Phoenix, Falcon, Hawkeye (Classic Suit), Spider-Man (Symbiote), Thanos, and Winter Soldier; Plus 10 races, 5 for each of the 2 extra vehicles, namely the Hawkeye Sky Cycle and Spider Buggy.

Tip: To turn on cheat codes, you first have to be in-game. Next, during gameplay press pause. Like in every Lego game you can enter codes from the Main Menu by selecting “Extras” and then “Enter Code”. After which you can activate the cheat. Remember that the next time you play the game, you’ll have to activate the cheats again.

Do you know of any Lego Marvel Super Heroes cheats or unlockables?
Let us know in the comments, you’ll get credit for finding out. – Thanks for visiting!