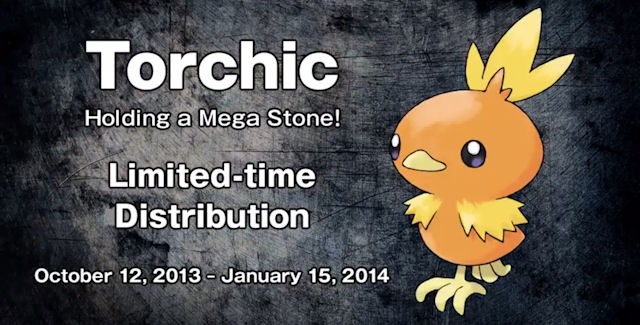 Here you find out how to catch Torchic and where to find Torchic in Pokemon X and Y! Torchic is the Pokemon X and Y special hidden/secret Pokemon who can not normally be captured within the game; Just like previous special Pokemon such as Mew, Celebi and Deoxys.

How to get Torchic in Pokemon X and Y is important, because you simply CANNOT find a Torchic holding a Mega Stone and with the Hidden Ability Speed Boost through regular gameplay. — Don’t miss your chance to catch this exceedingly rare Pokémon before January 15th, 2014, otherwise you may not ever get another chance to catch Torchic in the “Mega Torchic Mystery Gift Event”! So follow the steps outlined on this page by scrolling down…

Between October 12th, 2013 to January 15th, 2014; Pokemon X and Y players can get a special Torchic holding the Blazikenite, the Mega Stone needed for Blaziken’s Mega Evolution.

The Torchic you’ll get via the Nintendo Network has the Hidden Ability Speed Boost. Speed Boost increases a Pokémon’s Speed at the end of every turn, making it a very powerful Ability, and you can’t get it through normal gameplay. This Level 10 Pokémon knows the moves Scratch, Growl, Focus Energy, and Ember, a solid foundation of moves to start Torchic’s growth.

• STEP 1: Select “Mystery Gift” on the game’s Main Menu.
• STEP 2: Select “Receive Gift”, then choose “Yes”.
• STEP 3: Select “Get Via Internet”, then choose “Yes”.
• STEP 4: Watch as you receive Torchic, once it’s finished you’ll get an on-screen message saying “The gift has been received!”
• STEP 5: Then speak to the delivery girl in any Pokemon Center to receive Torchic. Beforehand free up 1 of the 6 spots in your party so there’s room for Torchic to be placed.
• STEP 6: After the game confirms you’ve “Received Torchic!” be sure to save your game! And after saving you’re done and you can play with Torchic.

ALL 6 STEPS are shown in this video guide. Press play and it will show you with voice-over tips how to download Torchic & how to pick it up at a Pokemon Center:

Important note about Mega Blaziken: Blaziken is the evolution of Torchic. If you miss your chance to receive this Torchic as a gift, you will not be able to Mega Evolve Blaziken. Get Torchic and the Blazikenite Mega Stone, and blaze toward Mega Evolution!

Special thanks to Doug for the voice-over video guide with all the handy tips!