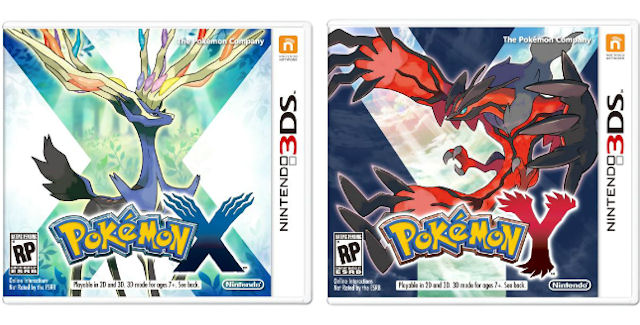 Our Pokemon X and Y walkthrough will guide you through the beginning to ending moments of gameplay with strategy tips for this RPG exclusively on the Nintendo 3DS.

Welcome to the world of Pokemon! The Pokemon games are a series of Role-Playing Games where you assume the role of a hero and set off on an exciting adventure with mysterious creatures called Pokemon! Beyond the exciting story, the series contains many social features, such as trading and battling with friends!

Let’s start the Pokemon X and Y walkthrough with a Live-Action introduction video!

Please note that viewers must be at least 3 to watch, it’s almost suitable for all ages. This game includes Comic Mischief, Mild Cartoon Violence.

An epic adventures awaits! Your grand adventure will take you to many amazing locations on your quest to become the Champion, the strongest Trainer of all. No matter where you go, you’ll encounter many different wild Pokémon that you can befriend.

Every corner of the star-shaped Kalos Region is brought to life, from the cobbled streets of Lumiose City to the most far-flung corners of the wilderness. Lumiose City is a thriving metropolis, and from the iconic tower at its centre to its bustling shops brimming with customers, you’re sure to find plenty to discover and enjoy.

Pokémon X and Pokémon Y introduce all-new features to the legacy of Pokémon games. See what your amazing new adventure has in store!

Get ready for two new battle formats in Pokémon X and Pokémon Y that will give you challenges unlike ever before. Help your Pokémon grow even stronger by mastering these sophisticated formats!

The six values that define your Pokémon are known as stats: HP, Attack, Defense, Sp. Atk, Sp. Def, and Speed. As it levels up, a Pokémon’s stats increase, making it faster or tougher or more powerful—or all-around better! The rate at which each stat increases depends on a number of factors, such as your Pokémon’s Nature and its underlying base stats, so even Pokémon of the same species at the exact same level could have different stats.

There are many factors that can influence stat growth, but the easiest one for a Trainer to affect is base stats. At a practical level, there are three main actions Trainers can take to manage their Pokémon’s base stats and influence how a Pokémon’s stats might increase. The first action is battling other Pokémon, the second action is using items on your Pokémon, and the third action is the new Super Training feature in Pokémon X and Pokémon Y, which enables you to raise a Pokémon’s base stats more easily than ever before. Raising these base stats will lead directly to higher stats, meaning more powerful hits, sturdier defenses, or quicker moves!

In the Pokémon games, Pokémon battle one another using a variety of moves. These are called Pokémon battles. You’ll take the role of a Trainer and, by battling against other Trainers and wild Pokémon, raise your Pokémon to become stronger.

Many of the Pokémon you’ll battle will be found in the wild, traveling without a Trainer. It’s easy to meet Pokémon in patches of tall grass outside towns.

• Step into fields of tall grass to encounter wild Pokémon!
• Stick to the paths if you want to avoid getting into battles.
• Be ready to face all kinds of Pokémon in the wild. Try to catch the Pokémon you encounter!

You’ll frequently encounter other Trainers around the Kalos region. When you meet eyes with another Trainer, a Pokémon battle will start! Seek out battles with these Trainers to gain valuable experience!

• Even if you’re a fair distance away from a Trainer, a battle will still commence!
• Trainers will often have tougher Pokémon to present you with a good challenge.
• The Trainers you meet will also frequently offer you words of encouragement!
• Even if you’re close to a Trainer, you won’t begin battling until you meet his or her eyes.
• When your Pokémon aren’t in good condition to battle, it might be best to pass by these Trainers if you can.

The Pokémon you befriend on your journey can gain experience in battle. Eventually, they’ll get stronger by leveling up. Even Pokémon that know only a few kinds of moves at first can learn a variety of move types to grow strong!

• Knowing a variety of moves ensures that your Pokémon are ready for a variety of challenges in battle.
• Most Pokémon will learn new and more powerful (or more useful) moves as they level up.
• By battling, Chespin will gain experience, which will lead to leveling up.
• Early on, your first Pokémon may struggle against tougher Pokémon.
• Keep battling to help your Pokémon level up and learn new moves!
• Its move set may not have the right attacks to deal with certain types of Pokémon.
• If your Pokémon has an open spot in its move set, it will automatically learn the new move.
• If your Pokémon’s move set is full, it will have to forget an old move before it can learn a new one.
• The more battles you participate in, the faster your Pokémon will grow.

Not only can you raise the Pokémon already in your party, but you can catch and befriend new Pokémon. Wild Pokémon can be caught in battle once their health points (HP) have hit a critical red color (or sometimes the yellow color is weak enough) if you have a Poké Ball to throw at them at that point!

The Pokédex is a high-tech device that records information, such as Pokémon you’ve seen, as well as their traits and Habitats. Try to find every kind of Pokémon and complete the Pokédex. The Pokémon that reside in the Kalos region are registered in one of three area categories. Completing the Pokédex is another major goal of your adventure!

Every Pokémon has its own type or types, such as Fire type, Flying type, or Psychic type, and the moves that Pokémon use are also split into these types. Each of those types has its own strengths and weaknesses. The relationship between these types is what gives Pokémon battles their deep strategy and endless fun!

Types are assigned both to moves and to the Pokémon themselves. These types can greatly affect the amount of damage dealt or received in battle, so if you learn how they line up against one another, you’ll give yourself an edge in battle.

Take a look at the “Type Matchup Chart” below to learn the full details: 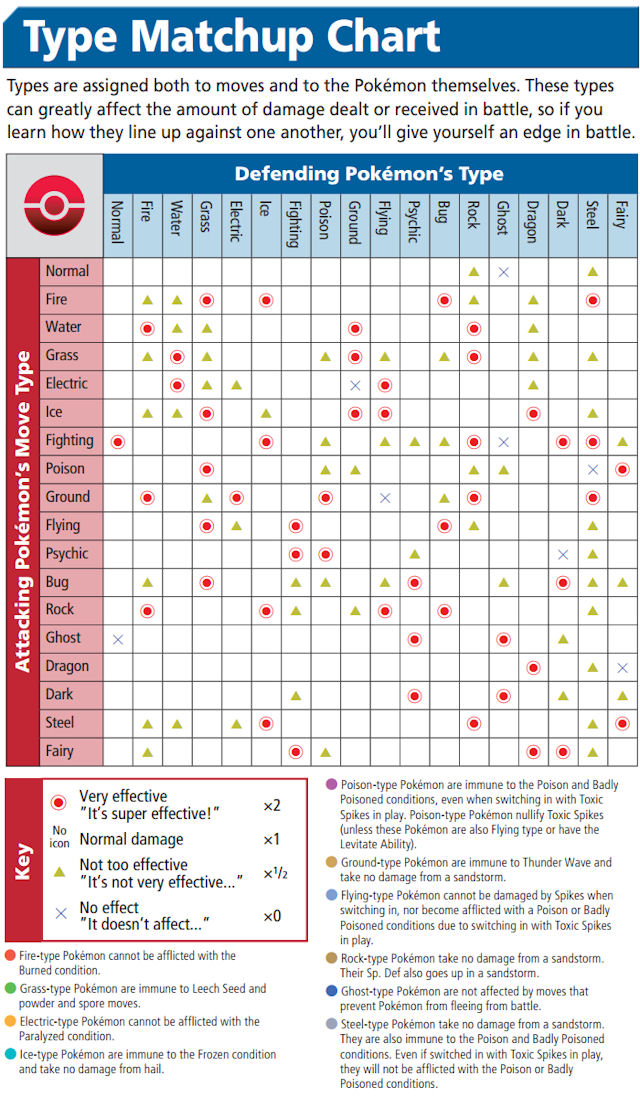 Welcome to the Pokemon X and Y walkthrough! PheonixMaster1 will be your voice-over commentator showing you around the game’s areas.

Your first Pokemon! At the beginning of your adventure, you will be given the opportunity to choose one of three Pokémon. Pick whichever Pokémon you prefer — there’s no wrong choice.

• Will you choose the Grass-type Pokémon Chespin as your first Pokémon? — The Grass-type Pokémon Chespin has a tough shell covering its head and back. Despite having a curious nature that tends to get it in trouble, Chespin keeps an optimistic outlook and doesn’t worry about small details.
• Or will the Fire-type Pokémon Fennekin be your first choice? — Searing heat blows from the ears of the Fire-type Pokémon Fennekin. This Pokémon loves to snack on twigs. Fennekin can be temperamental, but it tries to do its best for its Trainer.
• Perhaps you’ll take your first steps with the Water-type Pokémon Froakie at your side! — The Water-type Pokémon Froakie is both light and strong, making it capable of jumping incredibly high. The bubbles on its chest and back protect it from attacks. Froakie may appear absentminded, but in truth it pays close attention to its surroundings at all times.

This first video walkthrough will show you how to get started; Skip to 1:00 minute for the intro!

We arrive at Santalune Forest, and catch few more Pokemon while reaching Santalune City through 2 routes.

We defeat the Santalune Gym Leader called Viola and get our first gym badge. We use Chespin, but because Viola specializes in Bug-type Pokemon that makes her weakness a Fire-type like Fennekin. But in this video guide the Grass-type Chespin is used, since Viola’s Bug-type has a Water attack, so whichever Pokemon you choose to battle just make sure you can withstand that first Water attack (so level up Fennekin before entering the gym). As a result of the battle Chespin evolves into Quilladin.

We explore Route 4 and catch a lot of Pokemons here.

Here in Lumiose City you get the Classic Partner Pokemon! We battle Professor Scyamore at his lab and get Kanto Starters. Then we explore the city and get TM Return and TM False Swipe.

In Pokemon X and Pokemon Y, it’s not Professor Sycamore who gives you your first Pokémon at the very start of the game. Instead, when you receive a Pokémon from the professor in Lumiose City, you’ll be able to choose from Bulbasaur, Charmander, and Squirtle! These Pokémon were the first three Pokémon you could start your adventure with in Pokémon Red Version and Pokémon Blue Version, released in North America in 1998, the very beginning of the Pokémon series! And now you’ll be able to include one of them in your party once again.