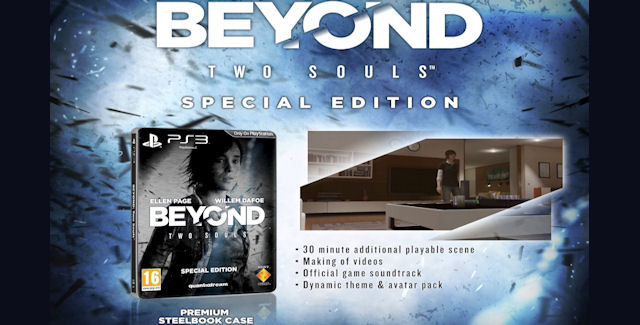 Here’s the Beyond: Two Souls Special Edition Unboxing for the PS3 exclusive game.

This interactive thriller / action game is coming to America/Canada on October 8th and to Europe/Australia on October 11th, 2013.

If you pre-ordered the game at GameStop in America or EB Games in Canada you would have received a free upgrade to the Beyond: Two Souls – Special Edition.
To get this Special Edition in European countries and elsewhere, you’ll have to seek out participating retailers that sell it at launch.

The Special Edition Features Are:

Take a look at the contents of the Beyond: Two Souls Special Edition box in the unboxing video, which includes a first look at the Avatars and Themes.

My next video shows all Special Edition Bonus Content including the Videos, Soundtrack, Avatars, Themes, and Advanced Experiments DLC Chapter.

Special thanks to Sony PlayStation for letting me post these footages.

Will you be getting Beyond: Two Souls?