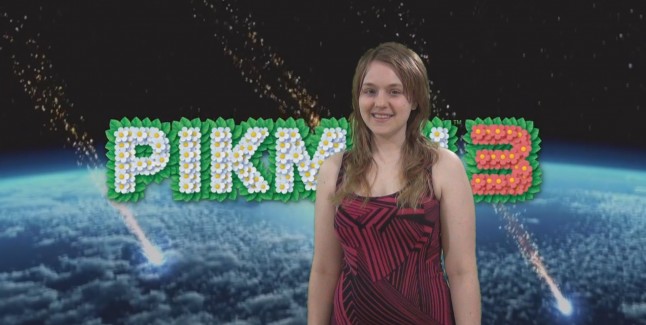 Thanks for stopping by for my Pikmin 3 review of the story, gameplay, aesthetics, and audio. I will also detail what I consider the best and worst aspects of this game and who would enjoy it.

You can watch my Pikmin 3 Video Review here:

Pikmin 3 is the direct sequel to the GameCube game Pikmin 2 and is the third game in the series. The inhabitants of the planet Koppai are undergoing an inadequacy of sustenance. Three explorers, Alph, Brittany and Charlie, set out to explore a planet that has an ample supply of large fruit. The explorers learn about and farm Pikmin to assist with collecting fruit to return the seeds to their home planet and keep their inhabitants from perishing from food deprivation. The three Koppaites search for Captain Olimar, the protagonist of the previous games, who has stolen their cosmic drive key, a required item for the explorers to get back home.

Pikmin 3 is a strategy game that expands on the gameplay introduced in its predecessor by adding a third team member and two new Pikmin. The gameplay concentrates on guiding and leading a army of up to 100 loveable plant-like Pikmin of five colors: pink, blue, red, black, and yellow. Pikmin finish various assigned tasks, such as building bridges, destroying barriers, and beating enemies. With the GamePad, controlling all three unit members at once and distribution them Pikmin to accomplish numerous tasks is simple. Time is limited, with up to ninety-nine days to finish the assignment, the unit can only explore with Pikmin while it is daytime.

Though the tiny Koppaites do not realize it, the world they have landed on is actually Earth. Pikmin 3’s radiant colored, lush, and diverse surroundings is a perfect balance of well known and otherworldly. The three protagonists, look like miniature round dolls, and the Pikmin are even more loveable. Pikmin 3’s graphical concept appears teeming with life, thanks to the enhanced resolution the Wii U provides. Never once did I see any frame tearing or any other glitch that would break my concentration in the game.

The music in Pikmin 3 is subtle and complimentary to the light-hearted atmosphere of the game. Though it might sound contradictory, the music is simultaneously cheerful and relaxing at the same time.

The best part of this game was planning my day before getting started. I confess that I am a nerd who loves planning and organizing.

The worst part is the juicing sequence, because I am so efficient, collecting plenty of fruit was easy. Watching the overlong juicing sequence was brain-meltingly boring.

I know I will probably want to replay this game to try to beat the story mode in fewer days. Aside from the story mode, there are also two other ways to play Pikmin 3: mission mode and bingo battle. Mission mode features three ways to play: collect the fruit, battle enemies, and defeat bosses. Each challenge is five to fifteen minutes long and provides a set number of Pikmin. In bingo battle mode, two players get a bingo card filled with enemies, fruit, and marbles. The players must strategically find ways to not only collect the items needed to make a bingo, but also to ensure their opponent cannot win.

I would like to see more games use the Wii U GamePad as well as Pikmin 3 does. The GamePad provides an overhead map and other important statistics on its touch screen. The map can be used to control and assign tasks to all three squad members easily. It is possible to play the game in Off-TV Play mode, useful for getting in some game time and using the TV for something else.

I recommend this game to anyone who owns a Wii U, this is a must-own for the console. Playing Pikmin 3 has been the most fun I have had on the Wii U and the best utilization of the Wii U Gamepad. Fans of earlier Pikmin games will love the revitalization of the series. Pikmin 3 provides just enough challenge but is still relaxing to play, perfect for unwinding at the end of the day. With minimal violence and plenty of strategy, this game is perfect for any age.

Do you plan to pick up Pikmin 3? If you already own Pikmin 3, let me know your impression of it down in the comments below.