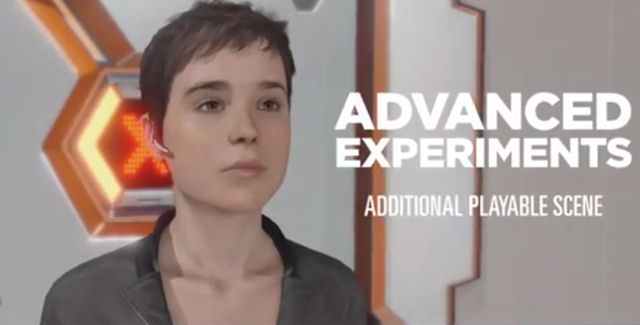 Index of Beyond Two Souls Guides:

How To Unlock The Extra “Advanced Experiments” Chapter

If you pre-order Beyond Two Souls at GameStop in America or EB Games in Canada, you will receive an exclusive 30-minute playable additional scene DLC. — No doubt this DLC Chapter will become available as paid DLC later in 2013.

In this scene, you’ll test your rapid problem-solving skills as you guide Jodie and the mysterious entity Aiden through a series of tough training missions. Over the course of 30 minutes of additional play, you’ll determine your ability to use your brain while keeping an ice-cool head in high-pressure situations — all while helping Jodie and Aiden collaborate to solve puzzles.

Here’s how to complete the included DLC scene within 10 minutes:

Watch the Beyond Two Souls screening as an Official Selection at Tribeca Film Festival and see the 1 hour screening of one of the most powerful scenes in the game, with 35 minutes of gameplay from the “Homeless” Chapter, and a one-hour panel discussion with stars Ellen Page, Eric Winter, and Kadeem Hardison, and writer/director David Cage giving tips and info about the game.

In Beyond Two Souls cheats have made way for DLC extras.

Pre-order the game at GameStop in America or EB Games in Canada to receive a free upgrade to the Beyond: Two Souls – Special Edition, which includes:

Here’s a first look at everything included in this set:

We also made the handy Beyond Two Souls guides listed above to help you with tips and tricks for the game!

Do you know of any Beyond Two Souls cheats or unlockables?
Let us know in the comments, you’ll get credit for finding out. – Thanks for visiting!