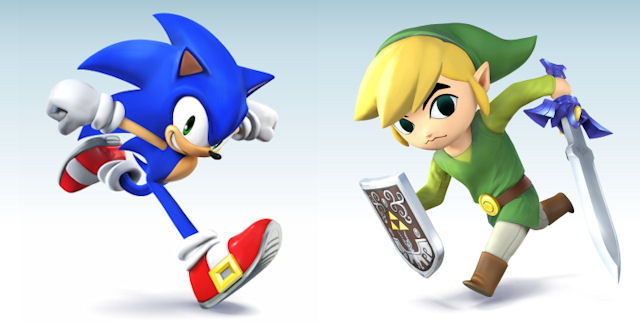 Sonic the Hedgehog and Toon Link are the latest two Super Smash Bros Wii U & 3DS characters to join the 2014 fighting game’s lineup, per the official smashbros.com blog announcements the past week.

Sonic and Toon Link were both newcomers in Super Smash Bros. Brawl on the Nintendo Wii. 😀 It’s great to see them return in the Wii U and 3DS title! Although they were expected with Toon Link just appearing in the Wii U remake The Legend of Zelda: The Wind Waker HD; and with Sega announcing a deal for 3 games appearing exclusively on the Wii U (the 2 announced so far are Sonic Lost World and Mario & Sonic at the Sochi 2014 Olympic Winter Games).

Check out that first Super Smash Bros Wii U and 3DS reveal trailer; that includes newcomers like Mega Man and the ‘Animal Crossing’ Villager.

Who do you want added to the Super Smash Bros Wii U and 3DS lineup?