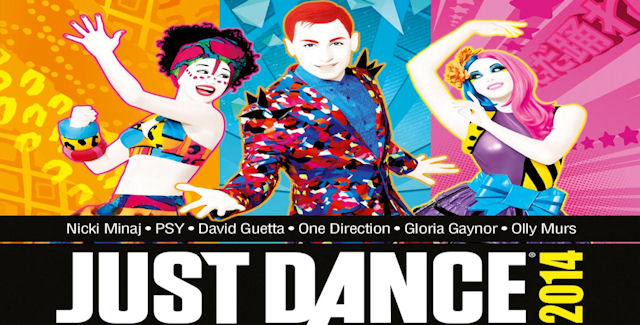 Our Just Dance 2014 walkthrough will guide you through the gameplay moves with strategy tips for this rhythm dancing game on the Wii, Wii U, Xbox 360 Kinect, PS3 Move, and soon Xbox One Kinect & PS4 Move.

The party is back! Just Dance 2014 – the latest edition of the world’s #1 selling dance game brand – is bringing all new moves with breakthrough features for every motion control platform and over 40 of the hottest tracks and dances.

Let’s start the Just Dance 2014 walkthrough with an introduction video!

Suitable for all ages 3 and up.

With Just Dance 2014’s fresh list of hot tracks, you control the party! Get friends and family moving with Pitbull ft. Christina Aguilera’s “Feel This Moment,” Psy’s “Gentleman,” or One Direction’s “Kiss You.” Celebrate the throwbacks with legendary songs like Gloria Gaynor’s “I Will Survive,” or bust out the best move to Ray Parker Jr.’s “Ghostbusters.”

Just Dance 2014 takes the fun to another level this year with all new ways to create the best party ever! Own the spotlight and lead back-up dancers with the new On Stage Mode, dance with anyone anywhere in the world with World Dance Floor, work out to customized Just Sweat experiences on any song– and much more! Bring home the ultimate party starter and join in the fun!

Welcome to the Just Dance 2014 walkthrough! Here we’ll be showing you a lot of gameplay from the game’s most popular songs.

Learn to dance like a pro by watching these professional dancers from the Just Dance 2014 demonstration showfloor. They show you how to make the moves to the headlining songs in the game.

Hey, if Sonic The Hedgehog and a Ghostbuster can join in on the fun, then so can you! 😀

Check out Tilmen dancing to Daft Punk’s Get Lucky.

Next, we’ve got official gameplay from half of the songs in the game.

Songs in this video guide in order of appearance:

Don’t forget about the free downloadable song that will be available after release. Just go to your console’s DLC online store.

Discover the gameplay moves for the song Roar by Katy Perry in Just Dance 2014!

This video guide shows the introducing to the “World Dance Floor” Online Multiplayer Mode. In it you can enjoy a full social experience as you connect and dance with others. Play Just Dance 2014 with your friends and players all around the world.

Work-In-Progress: More videos coming as soon as they are available.

Thanks to Ubisoft, Supercar & Tilmen for the walkthrough videos.