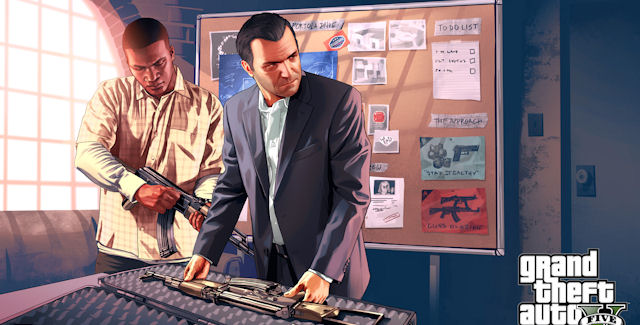 GTA 5 has more Weapons than any other GTA game before it, according to Rockstar.

The Grand Theft Auto 5 “Complete Weapons Guide” talks all about the game’s weapons and locations; and how to unlock some of the coolest weapons in the Xbox 360 and PlayStation 3 game. A lot are received by playing through the game’s Main & Side Missions, but there’s lots of handy tips in here to get the weapons right away at the start of the game. Take a look at the weapon guide videos to find out where they are! 🙂

First, we’ll show you how to get all weapons and weapon upgrades for FREE from Ammu-Nation, the in-game gun shop, early on in the game.

Location: Can be done during any active mission. Example early in the game is: During the “Nervous Ron” Mission at Trevor’s Safehouse, take his ATV to visit the nearby Ammu-Nation gun shop.

STEP 1: You’ll need to get together enough money, around $30,000 should be enough. Don’t worry you’ll get it back, that’s the trick to getting it all for free. The map location and in-game instructions are shown in Gametastik’s video guide below.

Next, we have a guide to find the secret RPG location to obtain the heavy weapon on top of the island-bridge (look for the red light) near the Los Santos International Airport.

Following that is the guide to finding the hidden SMG location to obtain the sub-machine gun weapon go right under the pier at Del Perro Beach.

Then there’s the secret Minigun location to obtain the heavy weapon on the Fort Zancudo military base. After going in the entrance, stick to the right side until you reach the big airtraffic tower. Go inside the tower and walk up the stairs until you’re halfway up to Floor 6 with a closed room with inside a guard and the Minigun with a 1,000 rounds of ammo.

Of course it’s no GTA game without having a secret Grenade Launcher location to obtain the heavy weapon with unlimited ammo. To find its location, go to Ron Alternates Wind Farm on the map. Enter the huge cave next to the Pacific Ocean there, and diving underwater at the end of the cave to grab the Grenade Launcher.
When you surface save the game and then reload it and the Grenade Launcher will respawn (or switch between character and back for the same effect). Essentially giving you unlimited ammo, not that you’ll need it with such a powerful weapon.

Lastly, here’s how to find the hidden MG locations. It’s on the side of the highway road at the top of the map, there are multiple spots to find it, as shown in this video guide.

The Weapon selection is now done via a Red Dead Redemption-esque weapon wheel the wheel shows how much ammo is in each clip/ammo pool for each weapon, the weapons them selves, the weapons stats in the right hand corner, as well as what mods the weapon has in the middle.

• Baseball Bat
• Fist — How To Get Explosive Melee Attacks: During regular gameplay press these buttons on Xbox 360: Right, Left, A, Y, RB, B, B, B, LT; and on PS3 press: Right, Left, X, Triangle, R1, Circle, Circle, Circle, L2.
• Hammer — How To Unlock: Bonus DLC included with the Special and Collector’s Editions.
• Knife
• Nightstick
• Wrench — How To Unlock: Only available during a certain campaign mission’s torture sequence.

• Assault SMG (Holds 60 Rounds) — How To Unlock: Available for Story Mode only to Rockstar Games Social Club members (registration is free here).
• Micro SMG
• SMG — How To Unlock: Can be found under the pier at Del Perro Beach.

• Assault Shotgun
• Bullpup Shotgun — How To Unlock: Bonus DLC included with the Special and Collector’s Editions. It will also be made available to download for owners of the Normal Edition.
• Pump Shotgun
• Sawed-off Shotgun

The game’s Ammu-Nation gun shop will always be stocked with a pair of special firearms that also have their own unique customization options, skins and attachments. Weapons can be modified with the following: Silencers, Laser Sights, Scopes, Grips, Flashlights, Extended Magazines, and trim colors.