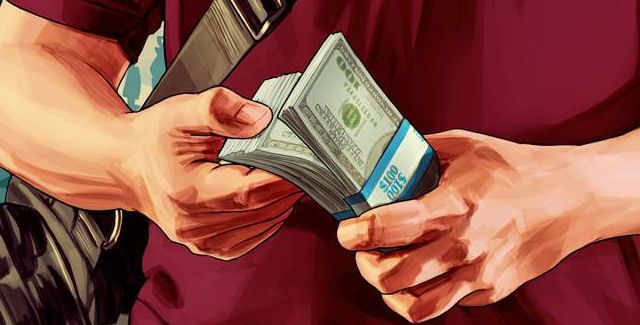 These Grand Theft Auto 5 money cheats for PS3 & Xbox 360 will show you how to collect quick cash by taking advantage of an infinite money glitch in the newest open world GTA game.

Below we show you step-by-step how to do the infinite money cheat!

Essentially it’s an Unlimited Money Farming Cheat. Here we show you two methods on how to easily farm Dollars in Grand Theft Auto 5, which is the game’s currency. Need a little spare change? Check out this Grand Theft Auto 5 exploit.

Location: You can find money at the bottom of the ocean floor where an airplane crashed. The exact coastal location is shown on the map in the videos below.

STEP 1: Swim down to the airplane’s tail end and right next to the crash site you’ll find a white glowing suitcase with $12,000 in it. The location is near the hospital, just in case you haven’t been swimming enough to bring your lung capacity to max, although it’ll cost you $5,000 to be revived, so you might want to do a lot of swimming first.

STEP 2: Make sure to save your game after collecting the cash, now load up the savegame you just saved to make the suitcase with cash appear again. You can repeat this over and over until you have enough money.

Here is a video guide showing you how to perform the first Grand Theft Auto 5 money cheat.

FASTER METHOD STEP 1: The best way to do the Money Dive is to get your character right on top of the suitcase, if his oxygen gets too low SWITCH CHARACTERS (by holding down on Directional-Pad and selecting a character with right analog stick). When you switch back to the swimming character your oxygen level will be full, and the suitcase will have respawned. This is the fastest & most profitable technique. –Discovered by Isaac Sensi

Now just surface and switch characters again and switch back immediately. The briefcase respawns every time you switch characters. So with this faster method you DO NOT have to load the game every time. Just save after each trip just in-case you die. You should receive $48,000 in less than 5 minutes of doing this. –Discovered by Howard McEwen

Take a look at this fast money cheat video to see how you can get twice as much money.

PROTIP: When you reach the suitcase at the bottom of the ocean, and you end up motionless right on top of the suitcase (at the end of an arms stroke). At that moment switch characters back & forth a few times in a row, and each time you’ll be able to pick up the suitcase again.

Now make sure both characters are on top of a money suitcase, and each time you switch between them they’ll get their oxygen level back to full and pick up the respawned suitcase again! Locations for two profitable suitcases are shown on the map and in the ocean in the below video guide. Using this new method you can potentially pick up up to ONE MILLION DOLLARS every 2 minutes!

Here are two methods on how to make money using the Stock Market.

The first Stock Market Guide explains how to get rich quick using company head murder missions (called Lester’s Assassination Missions) to drive up the price of the competitor, and investing your own money in the competitor (will be mentioned in the mission briefing) before executing the kill yourself. And right after the kill by quickly switching to the other characters and putting all their money on the competition as well, before the stock price goes up. Then go to sleep a few times (at least 3 or 4 times is recommended) to make up to 2 days pass by, in which time the stock price heavily increases and you can sell at a big profit (don’t wait too long or the price will go down again).

Mission Example: Kill the Redwood Cigarettes owner to drive up the Debonaire Cigarettes stock value. This video guide shows the process in detail:

The second Stock Market Guide teaches you how to become an excellent trader and make lots of money in both of the game’s stock markets; the DCN Exchange (for GTA5 Campaign) and BAWSAQ (for GTA Online).

This in-depth guide works best if you’ve already got a few million in the bank to invest with.

Tip: When buying stocks on the in-game website, hold down on the BUY button to speed up.

This next money cheat shows you how to get your money back after buying all of the weapons & weapon upgrades in the Ammu-Nation gun shop.

Location: Can be done during any active mission. Example early in the game is: During the “Nervous Ron” Mission at Trevor’s Safehouse, take his ATV to visit the Ammu-Nation gun shop nearby.

STEP 1: You’ll need to get together enough money, over $30,000 should be enough. Don’t worry you’ll get it back, that’s the cheat. The map location and in-game instructions are shown in Gametastik’s video guide below.

Here is the video guide for the second Grand Theft Auto 5 money cheat.

If you have another Grand Theft Auto 5 money cheat or tip, leave a comment and we’ll add it to this guide with credit to you. 🙂