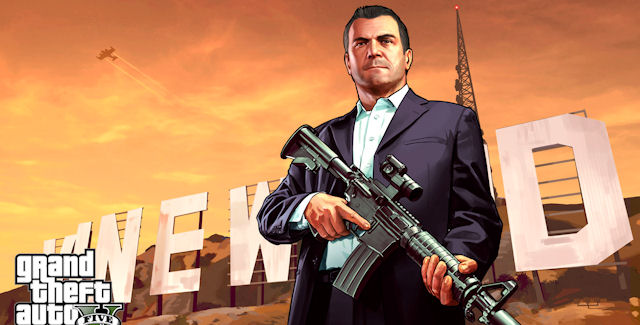 Tip: You have to manually enter the Grand Theft Auto 5 cheats into the game during gameplay each time you play (without pausing the game you must use the buttons and Directional-Pad).
Do it successfully and you’ll get a message saying “Cheat Activated”.
Be aware that cheats do not get saved after you exit the game.

Note: After entering the first cheat you’ll get this on-screen warning: “Cheats have been activated. Achievements / Trophies will not be awarded for the duration of this session.” As a result it’s recommended you do not save your game after using cheats, or only activate cheats when you’re logged in with a second profile on the console of your choice.

This video guide by RSP tells you how to perform all Grand Theft Auto 5 cheats!

Here’s how to buy & upgrade all of your weapons in Grand Theft Auto 5 for free.

Location: Can be done during any active mission. Example early in the game is: During the “Nervous Ron” Mission at Trevor’s Safehouse, take his ATV to visit the Ammu-Nation gun shop nearby.

First: You’ll need to get together enough money, over $30,000 should be enough. Don’t worry you’ll get it back, that’s the cheat. The map location and in-game instructions are shown in Gametastik’s video guide below.

If you’re not yet a registered member of Rockstar Games Social Club, signing up is free – simply create your profile, link your game, and get access to the free items.

• The powerful Assault Sub Machine Gun – the 60-rounds-magazine Assault SMG can be picked up from your local Ammu-nation.
• The blazing Annis Elegy RH8 sports car – available for use in both GTA V and GTA Online.
• Plus unique haircuts for Franklin (tight afro and goatee combo), Michael (full beard and shaved head), and Trevor (handlebar and tuft patch) to sport around town.
• Grand Theft Auto Online Social Club features to be announced.
• And qualify for exclusive discounts on select in-game purchases, such as item and vehicles, through Lifeinvader.com.

The following DLC items may currently only be pre-order bonuses or collector’s edition extras, but they will likely become paid DLC in the near-future.

First DLC Item: PS3 fans in North America and Latin America can pre-order the Day 1 Digital version of Grand Theft Auto V on PlayStation Network by going to the New on PS3: PSN Pre-Orders section of the PlayStation Store. Here is the pre-order bonus that comes with PSN and of course all retail copies:

• Atomic Blimp Vehicle (Pre-Order Bonus)
All Day 1 Digital pre-orders get access to fly the Atomic Blimp in-game vehicle just like those who pre-order a physical Standard Edition copy on Xbox 360 and PS3.

Second DLC Set: Grand Theft Auto V’s Special and Collector’s Editions (available for pre-order from select retailers while supplies last) include a bevy of enhancements and accessories for all three of protagonists as well as your character in Grand Theft Auto Online as you navigate the streets, skies and showrooms of Los Santos and Blaine County. Here are more details about these unique digital items that are included as part of the Special Edition and Collector’s Edition:

• Additional Weapons (Special and Collector’s Editions)
Regardless of which version you’ve chosen, your local Ammu-Nation will always be stocked with a pair of special firearms at no additional cost that also have their own unique customization options, skins and attachments – the .50 Caliber Pistol and the Bullpup Shotgun. You’ll also have access to the Hammer, which acts as a brutal melee weapon.

• Bonus Outfits, Tattoos and More (Special and Collector’s Editions)
When visiting any shops around Los Santos and Blaine County, Michael, Franklin and Trevor will receive a special 20% discount along with access to special items either in their personal wardrobes or from stores. Each character will receive 1 outfit each, one additional article of clothing (shirt, hoodie and jacket) each and a tattoo.

• Custom Characters for Grand Theft Auto Online (Collector’s Edition only)
GTA Online introduces a new spin on traditional character creation with the hereditary-based creation system. Select your character’s appearance by choosing your parent’s heritage, then use the gene dominance meter to dial-in which parent your appearance favors more. Additionally, you’ll customize your character’s daily activities – everything from family time to illegal work and sports to couch potato hours all have an impact on your character’s appearance and skill set (and you can always rank up your skill stats more via gameplay). As part of the Collector’s Edition package, you’ll get Niko Bellic from Grand Theft Auto IV, along with both Claude and Misty from Grand Theft Auto III to use as parent options within the character creation system.

• Unique Vehicles and Garage Property (Collector’s Edition only)
The Collector’s Edition also features an exclusive garage to store custom vehicles that comes stocked with the CarbonRS sports bike and the Hotknife – an open frame 1930’s style hotrod. In Grand Theft Auto Online your garage and the high-end Khamelion electric car, which is specific to GTA Online, are both purchased through in-game websites accessed through your Online character’s cell phone.

• Stunt Plane Trials (Special and Collector’s Editions)
Take in Los Santos and Blaine County at breakneck speeds in the Grand Theft Auto V Stunt Plane Trials. In five thrilling and unique challenges, you’ll zip through mountains, deserts, oceans, and cities as you navigate through a maze of checkpoints, each placed to push your Stunt Plane to the limit. Completing each Trial will improve the piloting skill of your character. Compare your times with friends and vie for the top spot on the leaderboard.

Do you know of any Grand Theft Auto 5 cheats or unlockables?
Let us know in the comments, you’ll get credit for finding out. – Thanks for visiting!