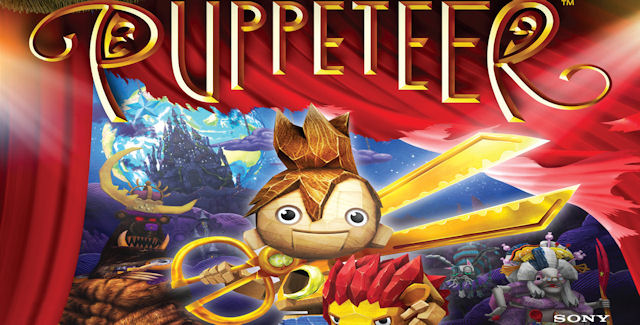 Our Puppeteer walkthrough will show how to unlock all 100 Heads for Kutaro and guide you through the beginning to ending moments of gameplay with strategy tips for this platformer on the PS3.

A boy named Kutaro is carried away to a black castle by the Moon Bear King who transforms him into a wooden puppet, then devours his head. But Kutaro discovers a pair of magical scissors to help him on his harrowing adventure to find his head, and his way home.

Let’s start the Puppeteer walkthrough with the story introduction video!

Please note that viewers must be at least 10-12 to watch, in America-Europe respectively, so no harm comes to those with innocent eyes. This game includes Alcohol Reference, Fantasy Violence, Mild Language, Suggestive Themes.

One dark moonlit night, a young boy named Kutaro was carried away by the maleficent Moon Bear King to a black castle where the unlucky lad was transformed into a puppet.

Kutaro displeased the terrible tyrant, who devoured the boy’s wooden head and cast away his body. But the headless hero was not alone, for he had discovered a very special pair of scissors to help him on his harrowing adventure to find his head, and his way home.

Puppeteer is a brand new franchise developed exclusively for PlayStation 3 by SCE JAPAN Studio. Set in a magical puppeteer’s theatre, this title will introduce you to a strange and fantastic world, where the environment is constantly changing. Players will enjoy a rich, dark fairytale where surprises lurk around every corner.

Welcome to the Puppeteer walkthrough! XCV will be your guide showing you around the game’s levels.

This Walkthrough of Puppeteer will show you how to unlock all 100 Heads (Head Hoarder Trophy), as well as the locations of all the Bonus stages in each level (or Curtain). Please check the description because that will have lots more info, including what Secret Head Actions can be found.

Bonus Stage unlocked with:
Spider, near the spider web in the tower
• You do not need to complete the Bonus stage during the level in order to unlock the Bonus Maximus Trophy. You can replay the Bonus Stages at the Title Menu and unlock the trophy that way.

Trophies unlocked:
The Tyrant’s Inner Tyrant (Bronze) – Open the nested Moon Bear King doll all the way.
• It requires the Hook ability, and you do this right after you get Calibrus to cut the purple webs. You’ll need to ‘R2’ the doll with Ying Yang 3 times.

Trophies unlocked:
Every Squirrel Has Its Thorns (Bronze) – Anger the mother of all squirrels.
• Just ‘R2’ the giant squirrel in the hole with the utensils a couple of times.

Puppeteer Walkthrough continues on Page 2 with Act 2: Who to Trust – Curtain 3.