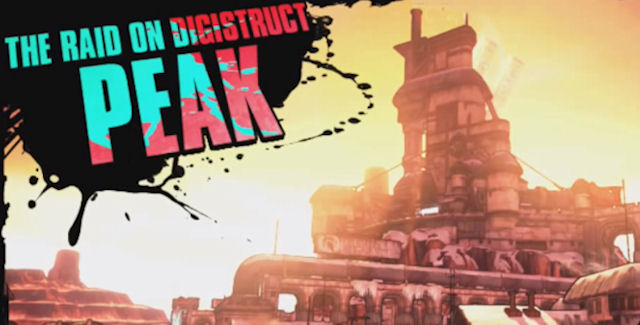 The Borderlands 2 Raid on Digistruct Peak walkthrough will guide you through the Ultimate Vault Hunter Upgrade Pack Two: Digistruct Peak Challenge with strategy tips for this FPS Action-RPG DLC on the PC, Mac, Xbox 360 & PS3.

Almost one year after Borderland 2’s release, 2K & Gearbox released this latest add-on pack. The DLC includes: One new head and skin set for each playable character, as well as Ultimate Vault Hunter Upgrade Pack 2: Digistruct Peak Challenge, offer a fistful of reasons for fans to continue the shooting and looting mayhem on Pandora.

Please note that viewers must be at least 18 to watch, so no harm comes to those with innocent eyes. This game includes Blood and Gore, Intense Violence, Language, Sexual Themes, Use of Alcohol.

The Ultimate Vault Hunter Upgrade Pack 2: Digistruct Peak Challenge offers 11 levels of powerful character growth, more legendary gear, and the new “Raid on Digistruct Peak” map, giving players a high-level challenge for only $4.99 / €4.99 / £3.99. When combined with the first Ultimate Vault Hunter Upgrade Pack – also available separately for $4.99, or as part of the Season Pass for $29.99 – players can now take their Vault Hunters to an all-time high level of 72 and collect even more rare and valuable loot. Level 72 players will also unlock the opportunity to over-level the game as they quest for even more powerful enemies and loot in Pandora. For fans who want some vanity with a dose of insanity, one new head and skin set will be available for each Vault Hunter for $0.99 each, making all six of the playable Borderlands 2 characters more customizable than ever before.

“After the close of the Season Pass, we promised fans they could expect more great content for Borderlands 2,” said Randy Pitchford, President of Gearbox Software. “Gearbox has been hard at work to provide additional top-shelf offerings for the title, and both our casual and hardcore fans alike will appreciate what’s laid on the table with this wave of exciting new downloadable content.”

“Fan support for the first Ultimate Vault Hunter Upgrade Pack and the many individual character customization sets continues to be an important part of the overall success of Borderlands 2,” said Christoph Hartmann, President of 2K. “With the game’s one-year anniversary on the horizon, 2K and Gearbox remain dedicated to supporting the Borderlands franchise, and will continue offering fans more of the DLC they want this holiday season and beyond.”

Mission #1: Here’s how to get started in Borderlands 2’s newest DLC. Let’s begin with the “very difficult” intro Challenge from Patricia Tannis called “Dr. T and the Vault Hunters”. 😛

Mission #2: The Ultimate Vault Hunter Upgrade Pack 2 Digistruct then continues with the Challenge titled “A History of Simulated Violence” with a Level 61 player.

After you have completed the Raid on Digistruct Peak, try completing it again at level 72 to unlock the Overpowered Enemies feature.

Mission #3: Here’s the Challenge titled “A History of Simulated Violence” with a Level 72 player.

Mission #4: When this DLC pack is played by a Level 72 player on Overpower Level 6 or higher, at the end, when you reach the Digistruct Peak route end it activates the “Final Boss Battle” against the Hyperion robot with the long binary numbers name.

Thanks to Masterkizz, James & Caballo for the walkthrough videos & tips.