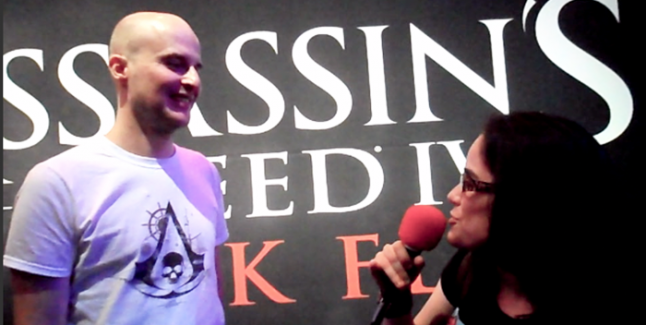 Welcome to the exclusive press coverage of Video Games Blogger at E3 2013: “The Assassin’s Creed 4 Interview”!

Pirates. That’s one word that will always get my attention. Which is one of the major reasons I am really looking forward to Assassins Creed IV: Black Flag. Assassin’s Creed 3 was pretty good… not my favorite. I like the AC franchise, but I’m not crazy about it. Add pirates to it though and I’M THERE! In AC3, the naval combat that was introduced not only peaked my interest but also made me wonder: WHY aren’t there any good pirate games out there? Are they THAT hard to make? I mean, who doesn’t like pirates!? Better yet, who doesn’t like controlling your own pirate ship!

So, even though my initial reaction to AC4 Black Flag was: WTF? I just beat AC3!! I’m very interested in the game because this time Ubisoft is going full force with the pirate theme as well as expanding on the naval aspect that had only been “teased” in AC3.

At E3 2013, I was fortunate enough to be able to get an “on the spot” interview with one of the developers on the project. Associate Producer, Karl Luhe was nice enough to answer my questions and even went into some detail of what we can expect when it comes to the protagonist pirate himself, Edward Kenway.

What are you excited for in Assassin’s Creed 4?