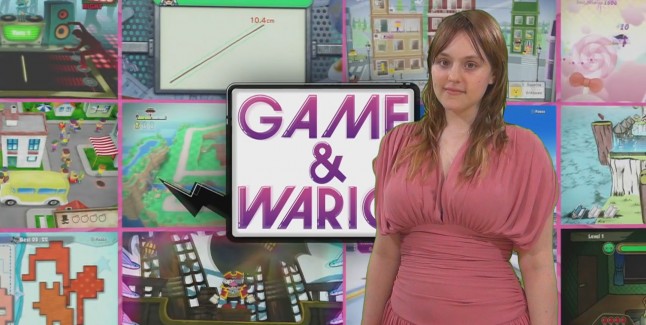 Thanks for stopping by for my review of Game & Wario. In this video review, you will hear my impression of Game & Wario’s story, gameplay, aesthetics, and audio. I will also reveal what I consider the best and worst aspects of this game. Finally, I will recommend who I think would enjoy Game & Wario.

There is not exactly a story for Game & Wario, it is a compilation of sixteen mini-games, which vary in genre and all have their own simple plots. Ten games are single-player, two games support up to two players, and the remaining four are multiplayer games for up to five players.

Each mini-game uses the Wii U Gamepad in a variety of ways. My all-time favorite, of course, was “Gamer”. This single-player mini-game perfectly captures trying to sneak some game time after bedtime. The Gamepad is acts as a handheld, which features simple mini-games. What is challenging about this game is playing a handheld game while simultaneously watching a television screen to know when to hide before mom checks in. Even though I had years of experience dodging my own mother’s watchful eye, I found this mini-game challenging and addicting.

“Arrow” uses the Gamepad as a bow used to launch arrows at strawberry-stealing enemies. A photography game, called “Shutter”, turns the Gamepad into a camera to take photos of criminals. “Ashley” is played by tilting the Gamepad to guide title character on her broom through a dessert. “Kung Fu” also uses tilting controls to guide a protagonist jumping over a series of platforms to collect delicious dumplings. I personally prefer dumplings before flowers *salute*. A couple of games use the Gamepad’s stylus to draw on screen, like in “Design”, which can be played by one or two players.

The visual design of this mini-game collection appears inspired by the traditional bright, colorful, and simple Nintendo style. Perhaps a bit too simple at times, cut scenes with Wario look like any free flash game found online. Fortunately, simple graphics do not make this game look unrefined. In fact, I think Game & Wario’s designers were paying tribute to retro Nintendo games that I used to play when I was a kid.

Much of the music in these games was fun and upbeat but I especially loved the cheesy, smooth disco from a mini-game called “Ski”. My favorite, “Gamer”, relied on sounds and increasingly intense music to indicate when to hide to avoid being caught by the mom.

The best part of this game is that several of these mini-games are well made and entertaining.

There is no specific aspect in this set of mini games that I consider worst. On contrary, many small problems stack up against Game & Wario’s quality. In most mini-games that required tilting my Gamepad, I found that response was sluggish and I would have to readjust my controller several times while playing. I consider any minute spent adjusting my controller a complete waste of time. Several mini-games were too simple to give any challenge whatsoever. Last, but certainly not least, sixteen games is far too few, considering how short they are.

A few multiplayer games would work nicely as party games and add some replay value to compilation. Otherwise, I am not inclined to go back and revisit any mini-games after beating them. A few of them I would not bother to beat in the first place.

I like game compilations and I would like to play more games in this series. Like the Pyoro game included, it would be awesome if there were more retro games remastered in this updated style and released together.

Wario & Game is cute and inoffensive, perfect for children between five and ten years old. I always hear from non-gamer adults that they are afraid to buy a game for a child because they worry about hidden violence, adult content, or bigotry. Wario & Game is safe and even has a handful of female protagonists so girls will not feel completely left out.

So, do you plan to pick up Game & Wario? If you already own Game & Wario, let me know your impression of it down in the comments below.