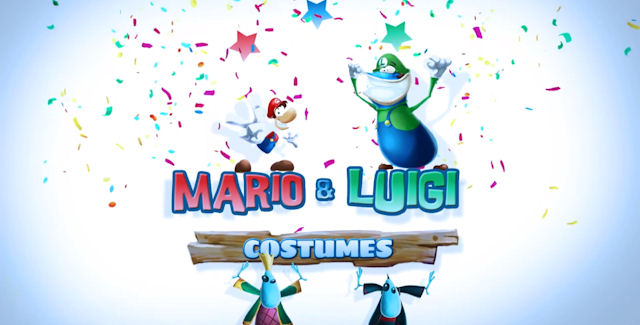 Ubisoft has announced that Nintendo’s popular video game heroes Mario and Luigi will make their debut appearance as Rayman Legends Unlockable Skins exclusive to the Wii U version!

Originally announced as a Wii U-exclusive, the highly anticipated platformer developed by Ubisoft Montpellier will now be arriving on Wii U as well as Xbox 360, PlayStation 3, PlayStation Vita, and PC. The game comes out in Europe & Australia on August 30th and in America, Canada & the rest of the world on September 3rd, 2013.

Exclusively available in the version for Nintendo’s Wii U system, players will be able to unlock skins for Rayman as Mario and Globox as Luigi after 20 minutes of gameplay, by collecting around 20,000 to 35,000 Lums in the levels, and then buying the character skins in the Heroes Gallery.

Take a look at the Mario and Luigi skins in this official Ubisoft trailer:

Note: The rest of the skins on ALL gaming platforms can be unlocked by collecting lots of Lums in all the levels, which also gets you lots of Gold Medals at the end of each level, for you to buy costumes with in the Heroes Gallery. Getting the most Lums per level also helps you reach new Levels of Awesomeness, which in turn unlocks more skins as well.

Are you looking forward to playing in these unlockable skins in Rayman Legends?