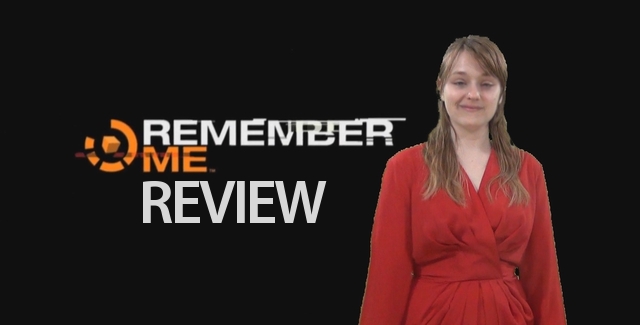 Thanks for stopping by for my review of Remember Me. In this video review, I will discuss my impression of the story, gameplay, aesthetics, and audio of Remember Me. I will also reveal what I consider the best and worst aspects of the game. Finally, I will give my recommendation of who I think would enjoy this game.

Remember Me thrusts the player straight into its world with a commercial for Sensen, an implant device that allows the user to re-experience, remove, and even share their actual memories. Following the commercial, we are jarringly introduced to the main character, Nilin, having her memory violently wiped. Nilin is helpless, in pain, and can barely walk but a sinister-looking robot instructs her to follow a path. Nilin had just enough strength to stumble forward, which hindered my overwhelming urge to explore. The surroundings were almost unexplainably terrifying, a cross between a mad scientist’s lab and a mental hospital. Screams of pain and fear pierced the air as I realized my curiosity was making an already slow, arduous task even slower. Then a voice speaks to Nilin, who apparently has a communication device implanted. Shuffling ahead lands Nilin in a moving line of other zombiefied “patients”, apparently queued up for a more thorough memory wipe that looks very unpleasant. With no choice but to trust the disembodied voice in her head, Nilin makes a daring escape.

Nilin ends up in the slums of Neo-Paris, year 2084. Regrettably, this is where the game starts to over-explain things. Do not get me wrong, Remember Me’s writing team deserves recognition for how ambitious the setting is. I was actually quite enjoying the bliss and terror of being a recent amnesiac in a world that I cannot fully comprehend. That feeling is suddenly ripped away just so the game can send the player through a lengthy cut scene followed by an overlong tutorial. Then another, even more awkwardly long cut scene. By the time the game actually gets started, the player is practically an expert on Neo-Paris’ politics, technology and some history. I understand and appreciate that Remember Me’s world is complex but I hate when a game needlessly reveals the entire background before it starts. The setting and Nilin’s personal history definitely should be discovered over the course of the game to preserve that exciting, apprehensive feeling of not knowing anything and relying on strangers in a strange world.

Nilin is told that she is a member of the “Errorists”, a group rebelling against the apparent corporate takeover of the population by Sensen creators, Memorize. In a heavy-handed reflection of real-world corporate greed, Memorize knows Sensen is highly addictive and that it turns a large portion of users into mutated and deranged Leapers. Fighting their pitiable ilk is nauseatingly bittersweet but necessary, as they will attack any non-Leaper they meet. The combat has a simple attack and dodge setup with a customizable combo modification system. As Nilin slowly regains her memory, attack combinations are unlocked. The custom combos are built by adding an attack with a specific effect, not too complicated but does add needed interest to the unexciting combat. The tutorial continues by tediously teaching Nilin the fine art of parkouring through the dilapidated linear slums of Neo-Paris.

The real fun starts with the ‘memory remixing’ mechanic, which grants Nilin access to a target’s memories to manipulate them. This is exactly as cool as it sounds, by modifying a memory Nilin can affect the motivations of another character and basically play god. Nilin can also steal memories to replay them in real-time to expose secrets. She also gains two nifty projectile weapon abilities: the ‘Spammer’ and ‘Junk Bolt’. The Spammer’s shots stun and damage enemies and interact with points of interest in the environment by opening up passages, for example. When the Spammer’s gauge is cooled down and filled, the Junk Bolt can be used to shoot larger blasts for greater damage or specific environment interactions.

Setting the game in the near future made me think of Nilin as a high-tech version of Alice in Wonderland. The world is almost familiar but just a little bit wrong and fantastic at the same time. From the very beginning, I noticed the game is very detail-oriented and the world of Remember Me feels alive and real. Minute details, like a buckle on Nilin’s clothing, or the mechanical components of a robot’s arm are meticulously animated. Looking out over the hell-scape of Neo-Paris’ slums, signs of life are everywhere as the flickering colors of futuristic technology clash with the dark, decaying ruins all around. Nilin literally climbs out of the slums and soars over to the bright, affluent side of Neo-Paris. The stark visual difference in the condition of the slums, compared to the wealthy side of the city, highlights the inequality that has split the citizens of Neo-Paris due to Memorize’s manipulation of the media.

The music can be a little overly dramatic at times but the scores were beautiful and fit the grandiose style of the game. Nilin’s voice actor digs deep down, giving a powerful and emotional performance, or maybe it is just the accent. Everybody else in the game could take it down a notch, or two. Nilin’s disembodied brother is so brooding and self-righteous and talks excessively. For a game that pays a lot of attention to the fine details, the in-game facial expressions are non-existent. Maybe that is why the voice actors were giving over-the-top performances but the juxtaposition of the character’s passive faces and actor’s wildly emotional voices was unnerving.

The best part of this game, for me at least, is the dystopian futuristic story with a moral. Reminders of the cost of inequality are all around in Remember Me, it made me want to see Nilin’s story through. I found it refreshing to play a game that evokes a real emotional response to the plot. I felt my determination to fix the broken world grow right alongside Nilin’s.

The worst part of the game how linear it tends to be. A detailed wonderland like Neo-Paris deserves to be combed through and explored. I do not really mind linear games usually but Neo-Paris appears to be teaming with exciting stories and unexplored areas, barely out of my reach. Just like the over-explaining in the beginning of the game, the linearity of the game feels a bit condescending.

Remember Me does allow for a new game plus, keeping all of the earned combo moves. There are also multiple difficulty settings, which can be changed throughout the game. Individual chapters can be selected and replayed to find hidden items. Fortunately, I like the story enough to forgive the excessive number of cut scenes, but I have not found a way to skip them.

I was delightfully surprised by how cool the memory remixing was. The mechanic fit perfectly into the game and was a great way to offset the slightly boring combat. I only wish it had been used more and perhaps had more choices to affect several possible outcomes.

I recommend this game to anyone who appreciates dystopian futuristic sci-fi settings. Anyone who would enjoy putting down some privileged corporate ne’er-do-wells should also like this game. While playing I was reminded at times of both Mirror’s Edge and the Prince of Persia series so fans of those games should try Remember Me.

So, do you plan to pick up Remember Me? If you already own Remember Me, let me know your impression of it down in the comments below.