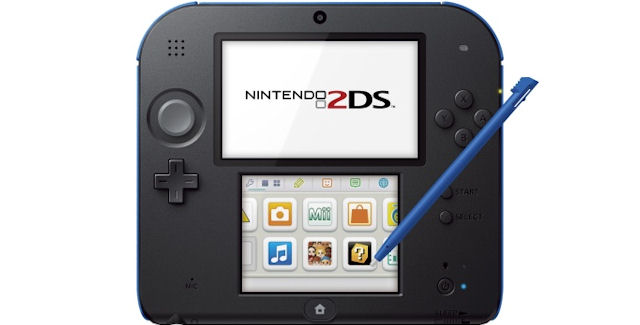 No, it’s not April Fools day. At the GameStop Managers Show in Las Vegas, USA, Nintendo announced the Nintendo 2DS handheld. Essentially it is the Nintendo 3DS without the 3D screen; and thus the portable system has no 3D graphics option, only 2D mode is available for 3DS games.

Conjecture: This was done on purpose to appeal to (parents of) younger gamers who want to buy Pokemon X or Y on October 12th in America & Europe, and that’s why the handheld comes out on the same day as the new Pokemon games. Compared to the Nintendo 3DS, the Nintendo 2DS system comes at a new $50 lower price of $129.99 / €129,99.

The newest member of the Nintendo 3DS family is designed specifically for anyone looking for a more affordable entry point into the world of Nintendo hand-held video games. Nintendo 2DS will be available in Red/White (in Europe) or Red/Black (in America) and Blue/Black (colors in both regions) on October 12th, 2013, at a suggested retail price of $129.99.

Nintendo 2DS plays the entire library of packaged and downloadable games for Nintendo 3DS only in 2D. The $129.99 system features a distinctive fixed, slate-type form factor, and optional carrying cases will be available in Red or Blue at launch at a suggested retail price of $12.99 (since the screens don’t close with the clamshell design removed, no doubt another cost saver passed on to consumers). Nintendo 2DS maintains many of the same hardware features as Nintendo 3DS: dual screens, game-play controls and touch-screen features. The system also has backward compatibility with the existing library of more than 2,000 Nintendo DS games, as well as access to wireless connectivity features like multiplayer online game play, fun Nintendo Video content and great digitally delivered games in the Nintendo eShop.

In America, people eager to test drive the new system will have the chance beginning in October, when Nintendo 2DS joins a sampling tour in conjunction with Simon Malls that visits several different markets before it wraps up on November 3rd, 2013.

Here’s a discussion video with different opinions from Nintendo fans:

I’ll be honest, this Nintendo 2DS isn’t aimed at me — I’m an avid Virtual Boy fanboy; Nintendo’s first 3D system from 1995. Since I enjoy 3D games so much, I’ll actually be upgrading from my green Nintendo 3DS to a red Nintendo 3DS XL soon for the twice as big 3D screen! 😀

Are you without a 3DS and interested in the low priced 2DS?