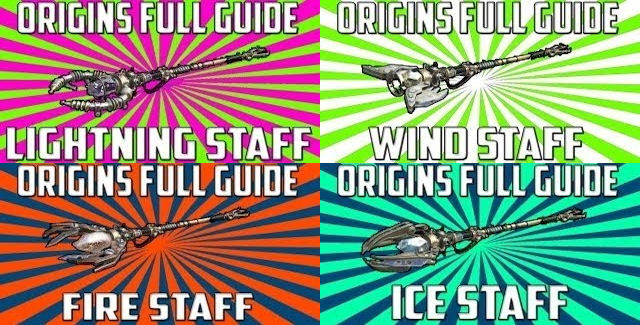 Get ready to tear the zombies a new one with these powerful weapons!

In this Dieselpunk-themed First World War zombies map, you’re armed with an arsenal that includes Wonder Weapons that harness supernatural powers, a diesel-drone, and there’s also a Mark IV tank.

These first video guides show the steps you must take to craft the Elemental Staff parts and stone into the 4 Staff Wonder Weapons.

How to build the blue Ice Staff:

You can upgrade it to the Ultimate Ice Staff:

How to build the orange Fire Staff:

How to build the purple Lighting Staff:

How to build the yellow Wind Staff:

This next video guide explains the steps to get your Mauser C96 gun upgraded with a Pack a Punch to give it a cool blue glow, adds a scope, and shoots laser bolts like a Mini Ray Gun Mark II. It’s then called a Boomhilda and has an increased magazine capacity of 50 rounds.

This tutorial revolves around how to activate the Pack a Punch by first turning on all 6 Generators in the Origins zombies map.

Here’s how to build the Maxis Drone AKA the Quadrotor diesel-drone in Origins.

Fill the 4 chests around the map with zombie souls killed around the chest itself — it takes around 50 souls per opened chest to fill it up — to eventually get a reward from a reward chest, like the one in the starting room. The reward is the new melee weapon, the Thunder Fists!

Note: You have to fill up each chest — which are all in the giant robot’s footprints — before the robot’s foot steps on the area again. Take too long and your progress will be lost.

Using the Thunder Fists method you can get a second weapon, the Napalm Monkey hidden equipment. After filling up the 4 chests, make your way to the tanks station and pick up the stone tablets in the back, then go to the back of the church and put the stone tablets in the holy water pedestal. Stay next to the holy water pedestal and kill the zombies around it to transfer their souls into it, you’ll hear incantation being spoken when each of them is ready to be picked up again. The last step is to put the tablet back to where you found it, but note to stay on the wooden planks as to not get the tablet dirty with mud again. Then the Napalm Monkey bomb will appear for you to pick up.

How to get on the Tank in Black Ops 2 Apocalypse

Here’s the Mark IV Tank location in the Origins zombie map, it’s in the Church. It takes 500 points to activate it for a ride around the map.

Please comment if you know of any other special new weapons in Apocalypse. 🙂

What’s your favorite weapon to use in Black Ops 2 Apocalypse?