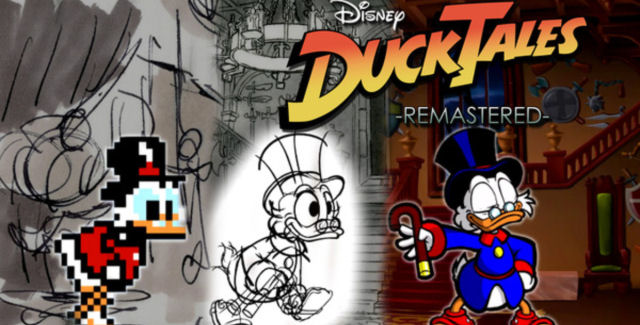 Get ready for Duck Tales, WOO-OO!

How To Unlock The Secret 6th Level: Mount Vesuvius

DuckTales Remastered includes a brand new level that the original did not have! This 6th secret level titled “Mount Vesuvius” can be unlocked by finishing the first 5 levels that are available from the start of the game: The Transylvania, Amazon, Himalayas, African Mines, and Moon levels.

Check out our complete walkthrough (linked to above) to see how to beat all levels.

For anyone still struggling with the race versus Magica De Spell after the final boss battles against Dracula Duck, here is an easy way to do the section after getting the Number One Dime (done on Hard difficulty setting). There are a couple shortcuts that make these sequence substantially less stressful.

Play Tip: If you’re having a hard time grabbing the ropes, and you’re using a controller to play, it’s suggested you use the D-Pad (four-point directional pad) instead. This will help you always grab the rope.

Video Guide:
– The first time saver is at 00:29 seconds. At that point you can save a small amount of time by bouncing and grabbing the third rope instead of the first or second one.
– Now, the big shortcut that makes this race every easy is at 00:35. If you pogo jump up and right you can grab a rope way to the right and save several seconds. If you do this the lava should not even be an issue at all and you can take your sweet time to finish.

How To Unlock Extreme Difficulty Mode

How To Get To The Secret Gyro Area

Get a number 7 in your total money amount collected, you can spend money on concept art to lower your amount until it has a 7 in it somewhere. After that, start The Amazon level and jump off the rope hanging form the helicopter right away as the level starts. This will trigger the secret Gyro area in the clouds to appear where you can collect lots of diamonds that Gyro throws down in this bonus stage.

In this video you’ll get an in-depth look at the new DuckTales Remastered game from the creators of the remake themselves, as they give tips about the game in a demonstration.

Since Remastered is a slightly different remake of the 1989 NES original, some of these cheats may or may not work. Try ’em out to find out!

When your score has a 7 as the 10-thousands digit, like 170,000, call Launchpad to take you back home. He’ll drop you off at a secret bonus stage.

– At the right extreme of the second floor, there is a large coffin which is marked "R-I-P". Cane jump on top of that coffin and you can walk through the right wall, which happens to be an illusionary wall. On the other side of this wall there is a chest, which contains the extra hit point.
– For the second Hit Point, move right across the level, until you reach the first pit. Jump down this pit and keep falling until you reach the bottom floor. Just move left until you reach Bubba. To save Bubba just hit the block underneath him with your cane and cane jump from the block to above the ice, which intraps him. He shows you a treasure chest, which contains the second extra hit point in the game.

If you have $3,000,000 in your total, you can refill your energy anytime by pausing the game and then pressing Select. Each time you press Select, you will consume that amount.

Select the level of the African Mines without a key to be transported to Transylvania. Enter the mine and climb on the car tracks and collect the extra life there. Then warp out of Transylvania without getting the key, after that repeat the process as often as you like for unlimited lives.

Get Past The Talking Statue For Free

In the Amazon level, when you will eventually get to a big gray statue that will offer you a way up if you pay a certain amount of money. Choose ”No” and then make Scrooge turn around and walk a little to his left. You should see one of the enemies that throw plungers at you approaching. Place yourself right under the rope that is at the top of the screen. Now, dodge the plumbers that the enemy throws at you, and then use Scrooge’s cane to jump off the top of that enemy in order to reach the rope without paying the statue.

Do you know of any DuckTales Remastered cheats or unlockables?
Let us know in the comments, you’ll get credit for finding out. – Thanks for visiting!