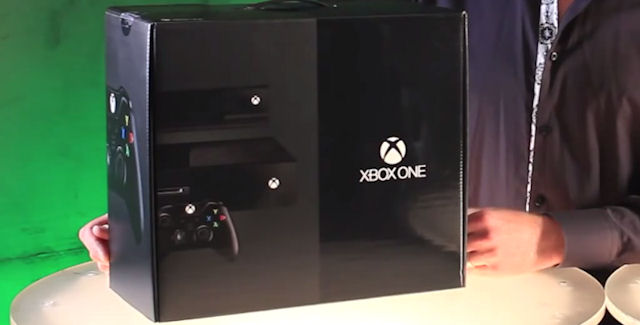 To quote him about the unboxing: “Although we are still a few months away from the official release of Xbox One, I wanted to do a quick unboxing to show you what you can expect when you open your Xbox One.”

What’s in the Xbox One Box:

• Xbox One console including a 500GB hard drive and slot-loading Blu-ray game & movie player.
• Xbox One wireless controller with AA batteries.
• Xbox One Kinect sensor with 1080p cameras and microphone.
• Xbox One headset, a wired mono voice-chat headset.
• HDMI cable capable of up to 4K HD TV resolution and 3D output.
• Xbox One power brick and cord.
• Xbox One manual and a logo sticker.
• The Day One Edition, aside from having a commemorative controller, features a token code to unlock an exclusive Day One achievement.

Note: The Xbox One console will now always come with a voice-chat headset to connect to the controller. Additionally, Microsoft revealed you can now turn off the Kinect camera & microphone and even disconnect it if you’re worried about privacy issues. — It looks like Microsoft has gone back on all the consumer-UNfriendly policies they announced at first, including the Xbox One Online DRM being removed and making the system Region Free like the PS4.

Will you be getting an Xbox One at launch or further in the future?