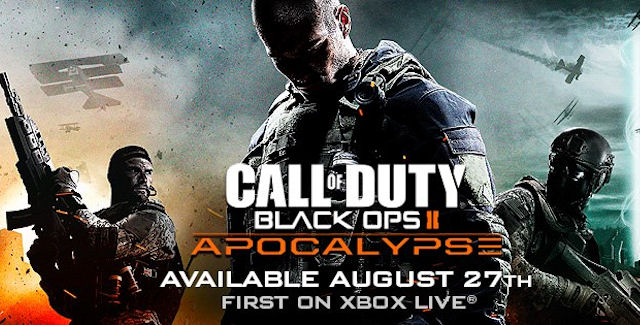 Treyarch’s latest Call of Duty: Black Ops 2 website update has revealed the first details for the Call of Duty: Black Ops 2 DLC #4, called Black Ops 2: Apocalypse. Which has been given a release date of August 27th, 2013 on Xbox 360 first as a timed exclusive. It’s exclusive for one month, after which the fourth and final DLC add-on will come to PlayStation 3 and Windows PC on September 26th, 2013. The Wii U date is unknown.

With Apocalypse, Activision and its award-winning studio Treyarch have partnered with award-winning Warner Bros. Records rock band, Avenged Sevenfold, who contribute the song, “Shepherd of Fire” from their upcoming album, “Hail to the King,” to the Zombies experience, which will be featured in the intro cinematic video for “Origins.” Along with Avenged Sevenfold, famed comics illustrator and painter, Alex Ross, has also lent his talent to “Origins,” providing original art that features the original Zombies heroes. One of the most esteemed comic book artists of all time, Ross is most famous for his work with DC and Marvel Comics, and has won many notable awards for his artistic design.

• Pod (Multiplayer Map): A failed utopian community from the 70’s has left stacks of dilapidated residential pods nestled into an abandoned cliff side in Taiwan. Its residents long gone, the modernist compound now hosts frenetic combat as players must run atop the pods, as well as navigate their multi-tiered interiors for a strategic edge.

• Frost (Multiplayer Map): Fresh snow meets explosive gunpowder in this snow-capped European city, where the bridge over a frozen canal separates it into two sides, requiring players to employ multi-level traversal strategies to outsmart and ultimately outshoot their enemies.

• Takeoff (Multiplayer Map): Fans of Stadium from the original Call of Duty: Black Ops First Strike DLC will find themselves at home on Takeoff. Marooned in the middle of the Pacific Ocean, this remote launch site is all about close-quarters combat, combining tight corners with open spaces for intense encounters.

• Dig (Multiplayer Map): An adaptation of the fan-favorite Courtyard from Call of Duty: World at War, where two archeological dig sites in Afghanistan become the perfect playground for combatants eager for hectic, unceasing confrontations. Treyarch, has retained the spirit of Courtyard with two major chokepoints, a wide open layout and raised platforms, but has provided fans with a fresh take on the multitude of paths.

• Origins (Zombie Map): In addition to the four maps, Apocalypse also reveals Origins, the most horrifying and imaginative Zombies experience to date. Players will be deployed to Dieselpunk-stylized World War I-era France where they will encounter the return of the four original heroes from the very first Zombies map, Tank, Nikolai, Takeo, and Rictofen, as well as hordes of zombies that have overrun trenches and fields, as well as the ruins of a mysterious and ancient location.

Here’s the Origins map teaser, followed by a video analysis:

Unleashed after the Germans unearthed the mysterious “Element 115,” this next chapter in the Zombies legacy will explore the saga’s origins as players reunite with an unlikely band of soldiers that come together to defeat the greatest evil the world has ever seen, using a period-specific arsenal that includes Wonder Weapons that harness supernatural powers, a diesel-drone and Mark IV tank, as well a new perk machine and power-ups – and that’s just the start. Players will need all the help they can get to succeed in defeating the undead, as well as evading an unprecedented 1,000-foot tall robot abomination. In this stylized undead adventure, they’ll need every advantage if they have any hope of surviving one of Treyarch’s deepest Zombies experiences to date.

Quote from the creators: “Apocalypse is Treyarch’s grand finale to Call of Duty: Black Ops II,” said Treyarch Studio Head, Mark Lamia. “It is the perfect culmination of our efforts, and fan feedback, with two all-new multiplayer maps for players to experience for the first time, and two fully reimagined fan-favorite multiplayer maps from past games – and Origins, our most epic Zombies experience to date. Apocalypse is a DLC pack that our fans will never forget.”

Are you excited for the Black Ops 2: Apocalypse DLC?