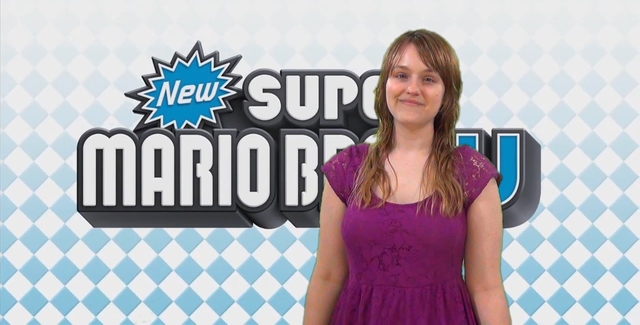 Welcome to the New Super Mario Bros. U + New Super Luigi U Review for the Nintendo Wii U.

When you say it out loud, the plot of most Mario Brothers games sounds like a bad acid trip: A princess is kidnapped incessantly by a giant spiky turtle and two plumbing brothers have to search for her through a ridiculously high number of trap-laden castles inhabited by mushrooms and smaller evil turtles. The eighties were a different time, I guess. Anyway, you know the drill – time to save the princess! Again. Only this time, Luigi also gets a chance to be the hero and has new and exciting levels to explore and beat.

New Super Mario Bros. U does not stray too far from past New Super Mario Bros. games, in terms of gameplay. There is a 4-player multiplayer option, and players can play as their custom Miis who are cosplaying as Mario, hat optional. The usual power-ups, like the Fire Flower and the Mini Mushroom, return along with a new power-up, the Super Acorn. This Super Acorn gives Mario a Flying Squirrel costume, bestowing the ability to glide and cling onto walls.

Both Mario and Luigi have an inventory that retains up to 10 items, like Power-Ups, from Toad Houses, Enemy Courses, and bosses. In Luigi’s add-on the gameplay is very similar to the original game but, as Luigi, the player can jump higher and longer. The levels of Super Luigi U are timed at one-hundred seconds, making them more fast-paced without much time to explore and collect Star Coins. Despite the difficulty amped up in the add-on, the availability of Baby Yoshis can help stuck players.

The Mario brand has been expertly refined over the years, culminating in a brilliantly fanciful and vibrant world. The world map itself is seamless, blending the individual worlds together. The game map now feels like a continuous realm, adding an oddly appropriate touch of realism to a whimsical universe. Even as the graphics and design of Mario games incrementally improve, the familiar characters are still cartoonish but more polished. The animation of both the minimal cut-scenes and the gameplay are without a flaw. The backgrounds, enemies, levels, and overworld feel more dynamic and energetic than ever before.

Admirers of Mario games music will love the familiarity of the tunes in New Super Mario Bros. U. My favorite song is the main overworld theme music, which I believe is an original song made for this game. I noticed that the song changes instruments throughout the world map and I liked every version. Most of the music was familiar and I recognized several melodies from other Mario games. All of it sounded great but I cannot help but wish that a few more songs that are original were added to the game. The most adorable thing happens when carrying a Baby Yoshi, it starts to hum along with the level song. Yes, finishing a course with Baby Yoshi gives the player a one up but I confess that I carried it with me mostly for the cute singing.

The best part of this game is the stunning design of the overworld and levels. There was obviously a lot of work put into the details of this game while simultaneously retaining the minimal style of the series.

The worst aspect of this game is the habit that Nintendo has fallen into with Mario platformers, recycling old levels, music, and minimal tropey plotlines. There is no doubt that this is the most polished and eye-catching version of a Super Mario Bros. game but the series could really use a fresh injection of originality.

In recent years, Nintendo has given players the ability to choose the difficulty of their Mario platformers. This adds replay value to the games by encouraging players to go back to beaten levels to find hidden secrets, beat their own record, and collect Star Coins.

New Super Mario Bros. U introduces a unique multiplayer mode called “Boost Mode”, one player using the Wii U GamePad touchscreen to interact with the game instead of controlling a character. Instead, they can help or hinder the level players in various ways, like creating temporarily blocks to either improve or impede the other players’ path. Unfortunately, this feature does not allow players to connect with others online and is strictly an offline feature. I think this game would have benefited greatly from an online co-op multiplayer.

New Super Mario Bros. U is a must-own for fans of Mario side scrolling platformer games. The design and gameplay are the refined result of gleaning the best of every Mario platformer and condensing it into one awesome game. Yes, some gamers may be tired of Nintendo’s obsessive need to recycle its games but I see it as a crusade to continually improve the series. Keep striving for perfection, Nintendo, you are almost there. I think with an online multiplayer and Peach back on the roster this game would have been perfect.

The New Super Luigi U add-on is part of the ‘Year of Luigi’ celebration and with eighty-two new levels it basically ends up being a whole new game. It is more challenging than the original game and still has the multiplayer options. This affordable add-on doubles the hours of gameplay and I highly recommend it to owners of New Super Mario Bros. U.