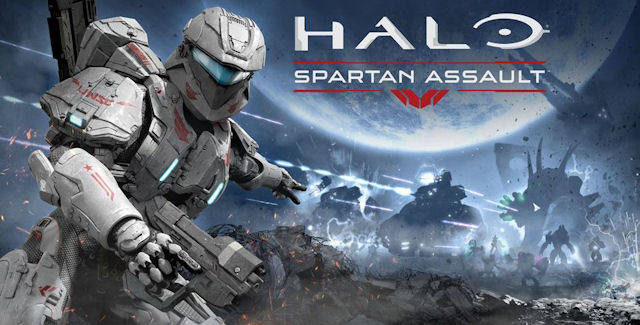 Our Halo Spartan Assault walkthrough will guide you through the beginning to ending moments of gameplay with strategy tips for this top-down action twin-stick shooter on the Windows 8 PC & Windows Phone 8* devices.

Halo: Spartan Assault, a new top-down action shooter set between the events of Halo 3 and Halo 4, is available now! This new chapter lets you experience the first missions of the Spartan Ops program and dives deeper into the backstory of Human-Covenant wars. Play through the eyes of Commander Sarah Palmer and Spartan Davis stationed aboard the UNSC Infinity as they fight never-before-seen battles against Covenant forces.

Available only for Windows 8 and Windows Phone 8, “Halo: Spartan Assault” is a new top-down action shooter that brings a “Halo” video game to touch-based devices for the first time in franchise history. Developed by 343 Industries in conjunction with Vanguard Games (of Greed Corp & Gatling Gears fame), “Halo: Spartan Assault” provides an accessible, pick-up-and-play experience for fans and newcomers alike.

Set between the events of “Halo 3” and “Halo 4,” “Halo: Spartan Assault” is a new chapter of the award-winning “Halo” universe that explores the first missions of the Spartan Ops program and dives deeper into the backstory of Human-Covenant wars. Battle your way through 25 action-packed missions in the main campaign against the Covenant as you explore the origin of the Spartan Ops program and Halo 4’s Spartan Commander, Sarah Palmer. Play through the eyes of either Commander Sarah Palmer or Spartan Davis stationed aboard the UNSC Infinity as they fight never-before-seen battles against Covenant forces. – Adding to the gameplay duration are mission-specific and weekly challenges.

With rich storytelling, intuitive controls, and best-in-class action, audio and graphics, “Halo: Spartan Assault” brings the epic scale and action of the “Halo” universe to mobile devices through unrivaled action and intensity.

If virtual thumbsticks aren’t your forte, then aside from dragging your thumbs across a capacitive screen, you can also play the Windows 8 PC version of Halo: Spartan Assault with your mouse and keyboard.
Additionally, Microsoft has promised that Halo: Spartan Assault will add support for the Wired Xbox 360 controller for Windows on Windows 8 PCs, tablets & Surface devices shortly after launch, via a title update.

Welcome to the Halo Spartan Assault walkthrough! Doug will be your voice-over commentator showing you around the game’s levels.

Level A-1: Assault on CF32
Mission Overview: The northern continent of X50, Draetheus-V’s moon, was riddled with large ice-covered sinkholes where the UNSC conducted a number of research projects. While there were standard security measures in place, no one was prepared when a massive fleet of Covenant Spirits appeared over the moon in direct violation of the Human/Covenant Treaty of 2552. — Spartan Davis deployed to site CF32 to support the project’s security detail, who were overwhelmed by the sudden attack. Davis managed to blunt the assault and moved to secure Alpha Facility, which he assumed was the inevitable target of the invastion force.

Level A-2: The Mirror Mantle Counter-Assault
Mission Overview: X50’s huge stretches of ice, the Mirror Flats, were flanked by towering ice cliffs. After ordering their main Wraith battalion to assault Research Facility Alpha, the Covenant had quickly deployed Phantoms to set up supporting artillery along the eastern cliff wall. With this artillery operational, a UNSC counter-offensive would be suicide. This rendered Alpha facility a vulnerable target. — Spartan Palmer and a detachment of marines were sent to infiltrate the Covenant positions and destroy the plasma artillery. Navigating the maze of cracks covering Mirror Mantle Ridge would have been an insurmountable challenge for most soldiers, but Palmer was able to use the terrain to her advantage and surprise the artillery positions. Her victory was instrumental in giving Alpha facility a fighting chance.

Level A-3: Reinforcement of the Perch
Mission Overview: The UNSC’s Research Facility Alpha was constructed at the base of an ancient Forerunner structure recently discovered by the UNSC. When it became clear the Covenant were heading for the Forerunner structure, UNSC Command feared Alpha facility would be crushed. — The Covenant were relying heavily on drop ship insertion and Spartan Davis realized they would be vulnerable to focused anti-aircraft fire, so he began establishing air defenses west of Alpha facility at a location designated Glacial Perch. Unfortunately, the Covenant had identified the need to secure this area, and when Davis arrived, Glacial Perch was swarming with Grunts and Elites.

Level A-4: Live To Fight
Mission Overview: Although the UNSC forces successfully slowed the Covenant, enemy numbers were too great to halt their advance indefinitely. A continuous stream of Covenant infantry, Wraiths, and air support were moving towards Research Facility Alpha. — Having concluded that returning to the main facility would be useless, Spartan Palmer began fighting her way upstream through the invasion in an attempt to reach one of the northern outposts. Her plan was to destroy Covenant air support and give the UNSC Hornets a chance to land near the outposts. The ultimate goal was to get off of X50 and warn Draetheus-V of the Covenant invasion.

Level A-5: The Last Stand
Mission Overview: Within an hour of their arrival at X50, the Covenant owned the moon. But despite the ferocity of the assault on X50, the UNSC base on Draetheus-V had no idea anything was afoot because the planet’s unique magnetic resonance frequently made off-world communication nearly impossible. — While Spartan Davis fought to hold the line on X50, Spartan Palmer executed her plan to depart to Draetheus-V and warn them of the inevitable Covenant invasion of the colony. Palmer ordered Marines in the area to fall back to the Hornet landing zones. Only 6 Marines made it there alive. They held out against an overwhelming Covenant force until Palmer managed to escape.

Level B-1: Siege of Faraday
Mission Overview: Although Spartan Palmer was successful in warning Draetheus-V of the coming attack, the Covenant assault hit the colonies’ defenses like a tidal wave. Draetheus-V’s main outpost, Faraday Base, was located on the border of an expanse of dense vegetation to the north and an enormous rock plateau to the south. — When the Covenant invasion force eventually arrived, the first defense lines surrounding Faraday were quickly breached before the base’s sentry turrets were fully operational. Palmer took to the field and almost singlehandedly held off the waves of Unggoy suicide units crashing down on the thick concrete wall behind the defense lines.

Level B-2: Reactor Field Relief
Mission Overview: UNSC technicians had built numerous magnetic reactor stations across Draetheus-V. The western reaction field was one of the largest of these stations and was of great interest to the Covenant. Luckily, the trench-like layout of the reactor field provided the Marines station there with a terrain advantage and Covenant infantry platoons had significant difficulty in seizing the station. — After supporting the Marines at Faraday, Spartan Palmer moved to provide support in the western reactor field. Palmer’s prime objectives were to protect several squads of Wolverines and halt the Banshees providing air support to the Covenant infantry.

Level B-3: Hunt for the Sangheili Command
Mission Overview: After Faraday Base’s defenses were stabilized, Spartan Palmer began trying to establish the location of the Covenant officers leading the invasion. — After taking significant losses, Marines of the 21st Scout platoon had managed to uncover a set of promising coordinates. These commanders’ locations were well hidden by Draetheus-V’s unique magnetic signatures. Without Palmer, the officers might have remained hidden for days. She found them within 30 minutes.

Level B-4: Battle for Epsilon Expanse
Mission Overview: Nine lofty bridges spanning an enormous gorge called the Epsilon Expanse allowed for access to the southern plateau where the majority of Covenant landing zones were located. The Covenant quickly secured these bridges and held UNSC forces at bay with heavy artillery. — Spartan Palmer escorted the 23rd Armored Cavalry to the Epsilon Expanse, but the Scorpion tanks would not survive the guaranteed heavy artillery fire. Taking a small team of Marines across one of the bridges, Palmer managed to infiltrate the Covenant camps and destroy several artillery turrets, giving the Scorpions the chance to advance and launch a counter-offensive.

Level B-5: Battle at Red Slate
Mission Overview: With the Covenant’s southern forces exposed, Spartan Palmer and the 23rd Armored Cavalry’s massive column of Scorpions and Grizzlies rushed across the Red Slate plateau on a collision course with several Covenant tank battalions. Only a UNSC counter-offensive would prevent Faraday from being crushed between the northern and southern front. — The 23rd had brought eighty-six vehicles to Draetheus-V. After the battle at Red Slate, there were only eight functioning vehicles left.

Level C-1: Descend from the Perch
Mission Overview: As Spartan Palmer led the charge on Draetheus-V, Spartan Davis continued to face considerable enemy threat on the moon. In a stroke of luck, the UNSC Eminent Domain was able to outmaneuver Covenant forces in orbit over the moon and offer some support by deploying Marines to the southern Mirror Flats. — The 3rd Helljumper Platoon was the first to land on Draetheus-V’s moon. Their drop zone was less than a mile from Alpha facility but the landing scattered them across the razor sharp rock faces of the mountain range called Glacial Perch. They were quickly surrounded by Covenant infantry and taking heavy losses. Spartan Davis, having held out against a constant stream of Unggoy and Sangheili for a full day, quickly set out to clear the landing zone for the second wave of drop pods.

Level C-2: Spirit Graveyard Stand-Off
Mission Overview: Having secured a safe landing zone at the Glacial Perch, Davis moved to regroup with a second platoon of marines, whose pods were coming down among dozens of crashed Spirits. These Spirits were destroyed from orbit by Eminent Domain just as the ship itself was destroyed. Davis and the Marines found Covenant infantry swarming from the wrecked Spirits, angry and looking for payback.

Level C-4: Infiltration of the Covenant Perimeter
Mission Overview: Covenant forces established a mile wide defensive perimeter around the Forerunner structure. To protect the technicians, UNSC command had deployed snipers among the marines reinforcements. They would provide suppressing fire from the higher ground around the structure. However, the area they were deploying to was swarming with stealth Sangheili. — Spartan Davis escorted several sniper teams to their locations and cleared the area of any distractions in the process. Without his support, the sniper squads wouldn’t have had a chance to make it safely to their assignments.

Level C-5: Superstructure Stand-Off
Mission Overview: Spartan Davis and the remaining Marines assisted the combat technicians securing the Forerunner structure while they Covenant reinforcements did everything in their power to stop the technicians.

More videos coming as soon as they are available.

Thanks to Doug for the walkthrough videos.