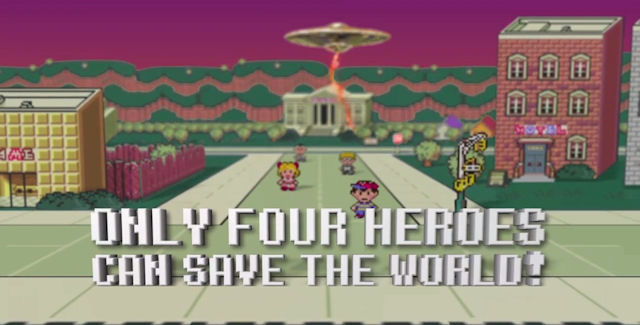 Fans of EarthBound (created by Shigesato Itoi) got a big surprise this afternoon with the game coming out in America and releasing for the first time in Europe as a Wii U Virtual Console title on Nintendo eShop!

After years of waiting with bated breath, fans and newcomers alike will be able to experience the classic 2D Super Nintendo RPG. You won’t have to pay the hundreds of dollars the game fetches on eBay, the eShop price is $9.99 / £6.99 / €9.99. Nintendo has even made the huge EarthBound manual available in digital form with the game for easy browsing on your Wii U GamePad.

Official Game Description: “Bizarre aliens roam the Earth! Can four average kids save the world from certain destruction? Intergalactic terror strikes the small town of Onett as a blazing extraterrestrial object crashes in the night! The Earth now faces imminent destruction by the universal evil threat, Giygas. A courageous boy names Ness, and his three friends, vow to save the planet from hideous destruction! Battle hundreds of off-the-wall monsters, roaming dinosaurs and alien enemies! Journey to exotic locations like Saturn Valley, Dusty Dunes Desert, and Deep Darkness. The ultimate test lies in the impending encounter with the all-powerful Giygas!”

Get a taster of this classic RPG with the official EarthBound gameplay trailer.

Now we just need eShop releases for the already translated into English EarthBound NES prequel “EarthBound 0”, and the “EarthBound 2” Game Boy Advance sequel translated, to make the EarthBound Trilogy complete on Virtual Console for the whole world to enjoy. Make it happen Nintendo! 🙂

Are you excited for EarthBound finally getting a digital Wii U release?