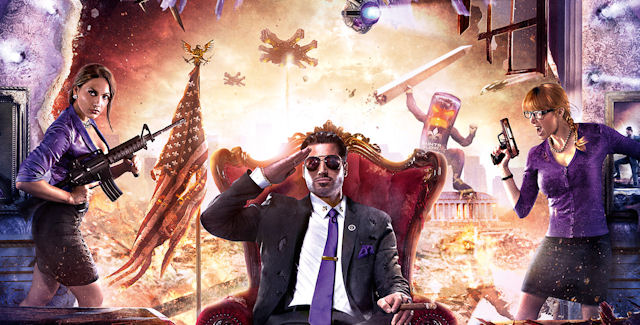 Note: It’s unclear if there will be a pre-release demo for all to play. Considering the game’s move from a bankrupt THQ to new publisher Deep Silver, I think we should just be happy we’re getting Saints Row 4 at all. Regardless, these gameplay demos should wet your appetite! 🙂

Senior Producer Jim Boone from Volition will show you how the leader of the Saints AKA the self-proclaimed “Patron Saint of America” encounters the alien overlord Zinyak for the first time and how he deals with an alien invasion in the White House – Saints Row style. In the second part of the video Jim presents more open world mayhem, including new weapons like the Blackhole Launcher, a move called “Death From Above” and an all-new experience by Professor Genki himself called Mind Over Murder.

Lastly, we have some other new gameplay from PAX 2013, including the Dubstep Gun!

Now the larger-than-life insanity of the Saints series gets a new twist with a catastrophic alien invasion, and the aliens have transported the Saints to a bizarro-Steelport simulation. Wield gargantuan superpowers and fight to free humanity from alien granddaddy Zinyak’s mental grasp. Escape the simulation that’s trapped the Saints crew, or die trying.