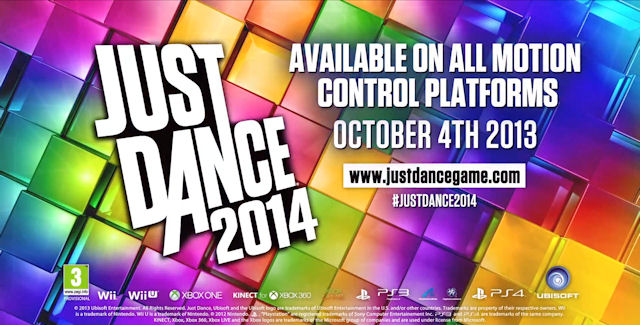 Ubisoft has confirmed the Just Dance 2014 release date is October 4th, 2013 in Europe/Australia AND October 8th, 2013 in America/Canada. At that time it’ll be available on Wii, Wii U, Xbox 360, and PlayStation 3; with the Xbox One and PlayStation 4 releases following in November 2013 when those next-gen consoles launch. 😀

Just Dance 2014 will feature over 40 new music tracks to dance to, ranging from chart-topping Billboard hits to classic dance party tracks. Whether it’s pop, Hip-Hop, rock, R&B or funk, there is something for everyone.

Here’s the first Just Dance 2014 video. Don’t tell the other readers, but I added it just for you. Enjoy! 😉

Will you be getting Just Dance 2014 on its release date?