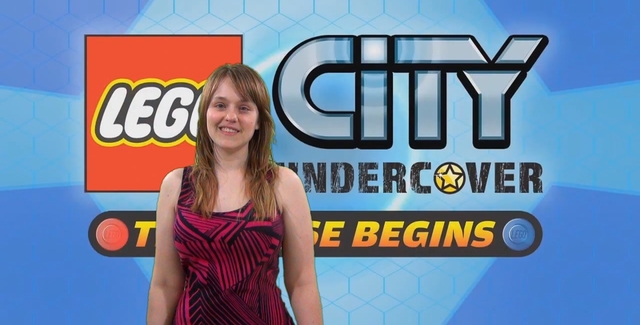 Thanks for stopping by for my review of LEGO City Undercover: The Chase Begins. In this video review, I will discuss my impression of the story, gameplay, aesthetics, and audio of The Chase Begins. I will also reveal what I consider the best and worst aspects of the game. Finally, I will give my recommendation of who I think would enjoy this game.

LEGO City Undercover: The Chase Begins brings us back to LEGO City but this time on the 3DS. Chase McCain is again the star of this story, playing a rookie cop whose mission is to arrest Rex Fury. The Chase Begins is set two years before the events of LEGO City Undercover, revealing the story that brought the main characters together. Being a prequel is automatically a challenge because the audience already knows the whole story.

The Chase Begins brings back the puns and parody that I enjoyed so much in the Wii U game. The lowbrow juvenile potty jokes and slapstick always manages to make me chuckle. Chase still gets to be a fashionista by collecting several costumes, which Chase uses to solve his missions. Along the way, Chase is building the good and bad relationships already built up in the first LEGO City.

Similar to its predecessor, The Chase Begins’ gameplay is comparable to Grand Theft Auto. Chase can commandeer any car on the road and drive around an open world city to complete missions for rewards. The bottom 3DS screen fills the role of the communicator that was the controller in the Wii U game. The gameplay seems to move along more quickly than the Wii U LEGO city because there is less time spent driving around the map. Unfortunately, there appears to be fewer vehicles available as well as a narrower depth perception.

The fighting and arresting of criminals is still simple and fun but the boss fights are especially imaginative and energetic. TT Fusion dealt with the limitations of the 3DS by designing the missions and cut scenes to be shorter for short bursts of gameplay. Along with the various costumes, Chase also has access to an assortment of weapons, including chicken egg shooters and freeze rays. The violence is toned down and cartoonish keeping with the lighthearted style of the series.

I have to imagine that LEGO City’s crime wave includes pollution creating smog all over the city and residents are hiding in their homes instead of out driving on the streets. That is the only way that I can explain how dull and cloudy this game looks. It is a real disappointment because the Wii U game is so colorful and crisp with terrific animation. The cut scenes in this game are simultaneously pixelated and blurry, with low contrast. I expect bright colors from a LEGO game and especially from a Nintendo game.

The Chase Begins does not even deliver my lowest expectations, raised by gorgeous games like Luigi’s Mansion. The in-game graphics have noticeable jagged edges, probably because the screen focuses so tightly on the player character. However, if the camera pulled out more it would become apparent that the visual depth of the game is rather disappointing. Along with all of the good things that come over from the Wii U game to The Chase Begins came the long loading screen with the rotating badge. Fortunately, the developers did add some tips to the bottom screen to give the player something to look at.

There is less voice acting in The Chase Begins but I understand why they kept the cut scenes shorter. What voice acting they did bring to this game was short, snappy, and fun. The same was true of the music, which is lighthearted and catchy. It seems that most of the music was recycled from the first LEGO City game but the quality still sounded fine.

The best thing about this game is being able to get a similar experience on two different consoles. When I am out of the house, or having a lazy day in bed, the 3DS version of LEGO City is still fun to explore.

The worst aspect of the game is low quality of the graphics and enabling the 3D exacerbates the unappealing jagged edges. I used to think that a screen as small as the one on the 3DS, would be forgiving when it comes to rendering graphics. In this game, I can see every flaw, which leads me to question why the developer did not address this issue.

As with LEGO City Undercover, there is a lot to do in The Chase Begins. While I do not think that there is a whole lot of replay value in this game, the first play through is very satisfying.

I appreciate that Nintendo has brought this series to both that Wii U and the Nintendo 3DS and I want to see that happen with more games. Nintendo fans are likely to have both consoles and do not always have time to play on the Wii U. The 3DS provides a convenient way to hang out in LEGO City when playing on a home console is not an option.

In some areas of the game, the developers compensated for the limitations of the 3DS while keeping with the style of the Wii U LEGO City Undercover but other aspects are lacking in glaring ways. The few critical missteps aside, LEGO City Undercover: The Chase begins is perfect for quick bursts of play, providing a variety of new things to see while staying true to the series.