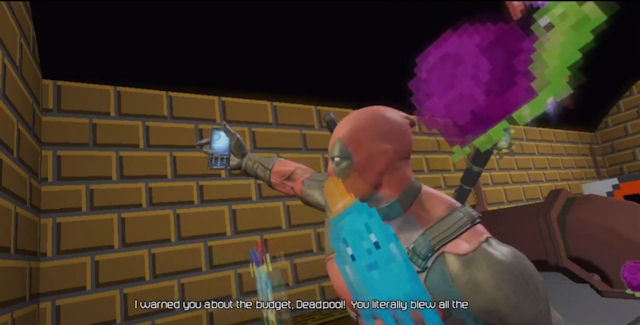 Let’s take a look at some funny Deadpool Game easter eggs! They can be found if you know where to look! 🙂

Easter eggs have been confirmed for Deadpool Game. Watch footage of them all below. Because it’s Deadpool, some coarse language ahead.

The Deadpool game turns into a top-down 8-bit retro game during Chapter 3: Taking A Chance.

A scenes that follows after Deadpool opens a huge retro-looking treasure chest is a JRPG easter egg. Although there’s nothing in the chest, the game still upgrades your Teleport ability.

During Chapter 5: Landed in Prison, when Deadpool is after Blockbuster to save Rogue, he stumbles upon a Shower Surprise Party room. Cameo appearances you can find here include: Gambit on the keyboard, Domino dancing, as well as Psylocke and Vertigo in the pool.

At the start of the game Deadpool makes a phone call to his own voice actor Nolan North, putting in the request Nolan provide the voice over work for Deadpool’s game.

In the Deadpool Universe, they use TWERT for their Facebook/Twitter-esque social media.

Spoiler alert! This ruins one of the bosses in the game. Watch only if you don’t mind spoilers.

In the sewer level, there’s a box of pizza and one pair of sai (that 3 pronged knife needle thing which is Deadpool’s weapon as well). This is referencing Teenage Mutant Ninja Turtles’s Raphael! Also, both he and Deadpool are both sporting red color.

Pay attention to Deadpool on the game’s Start Menu, because Deadpool teleports off screen and comes back in a different costume every time!

Have you found any Deadpool Game easter eggs?