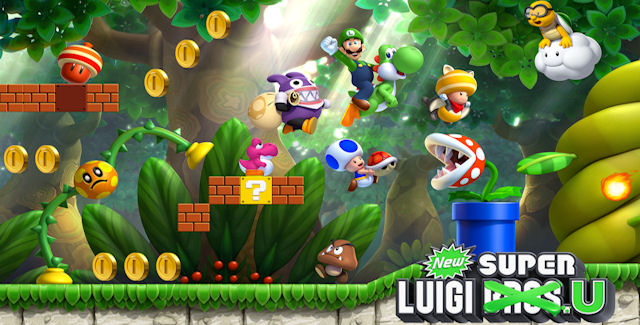 Our New Super Luigi U walkthrough will guide you through the beginning to ending moments of gameplay with strategy tips for this Platformer on the Nintendo Wii U. This is a DLC add-on for New Super Mario Bros. U.

Luigi takes center stage in his first starring role in a platform adventure! Show off your skills as the green-hatted hero, complete with his trademark high jump, as you experience over 80 new courses! New Super Luigi U celebrates the Year of Luigi.

Let’s start the New Super Luigi U walkthrough with an introduction video!

Suitable to viewers of all ages. This game does include Comic Mischief, so recommended minimum age is 3+ years old.

While the game’s basic systems re the same as New Super Mario Bros. U, the 82 courses on the World Map have been replaced with brand new ones for Luigi! A whole host of challenging new levels await.

You’ve only got 100 seconds to clear each course, and the clock’s ticking! It’s going to be one super-speedy adventure for Luigi.

Please note: The only mode featured in this game is Story Mode.

What’s different in New Super Luigi U? This video shows you!

Luigi can jump higher and has much more momentum than Mario! These differences make for a totally unique style of play — which is sure to become clear as soon as you start to guide Luigi around the game’s levels.

Luigi jumps higher than Mario and slides further too.

Nabbit, our old friend from New Super Mario Bros. U, can now be selected as a player character in co-operative multiplayer. While Nabbit can’t use power-ups, he also doesn’t take any damage if he bumps into enemies. As such, he’s an ideal character for anyone who finds action games tricky.

These walkthrough videos show you how to reach the end of each stage in New Super Luigi U. As well as revealing all hidden exits to secret levels, where available.

Here are the first 4 levels of World 1 from start to end, completed within 100 seconds for each level.

Thanks to Nintendo & Daan for the walkthrough videos.