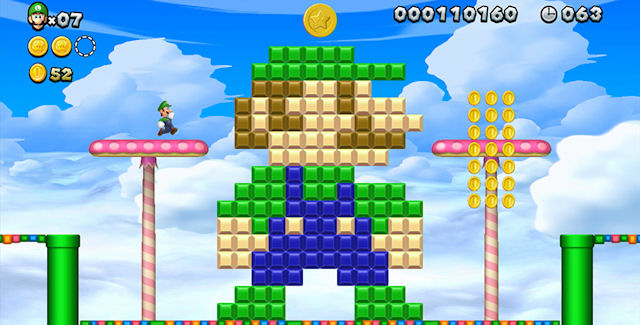 Note: This Star Coins hunt is worth the effort, because collecting all of them in each of the worlds is a collectible requirement to get 100% completion in New Super Luigi U!

During a co-op multiplayer game, Player 2, 3, 4 or 5 can choose to play as Nabbit alongside Luigi and the Toads. To get Nabbit in singleplayer, you’ll have to hold down the ZL button on your Wii U Gamepad or Wii U Pro Controller / hold down the B button on the Wii Remote on the overworld map and then start the level you’re standing on. Then Luigi will be turned into Nabbit.

Nabbit cannot be harmed by any enemy attacks, ensuring that the Nabbit player can much more easily reach the end of the level and all hard-to-reach surrounded-by-enemies Star Coins.

It’s the ultimate cheat for collecting most of the New Super Luigi U star coins the easy way! Since it’s those hard-to-reach locations that Star Coins are often hidden.

This official Nintendo video shows Nabbit walking (without dying) over groups of the deadly indestructible Muncher plants to reach a Star Coin.
See what other difficult areas Nabbit can easily reach in the gameplay section at 1:15 minutes into the guide video here:

These video guides show the location of every Star Coin in the stages of New Super Luigi U.

Here are the first 4 levels of World 1 with most of the Star Coins found.

[Work-In-Progress: More level-specific guides for Worlds 1-8 coming later if you want them]

Thanks to Nintendo & Daan for the star coins walkthrough videos.

Feel free to leave a comment if you have a question or to let us know if this star coins guide helped you. 🙂