Home » Cheats » PS3 Cheats » The Last of Us Cheats

The Last of Us Cheats 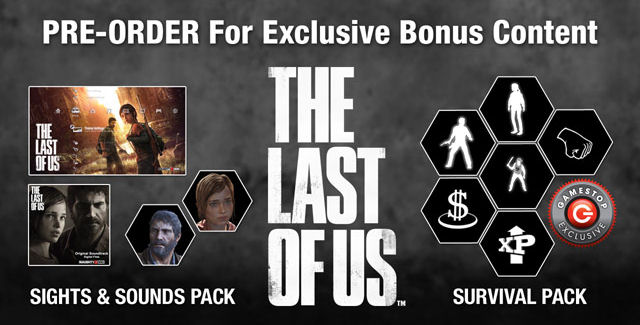 The Last of Us Cheats

How To Unlock The Survivor Modes

How to unlock Survivor Mode: Complete the game’s campaign on any difficulty level.

How to unlock Survivor+ Mode: Complete the game’s campaign on the Survivor difficulty level.

Bonus Skins on Survivor+ Mode: Finishing the campaign on Survivor+ difficulty mode is what unlocks the Jak and Daxter Skins for Joel and Ellie. — Thanks to CanadianAsterix for the tip!

After you finish The Last of Us on Normal difficulty mode, you should see a change in the game’s main menu screen. Now you’ll see a knife leaning against the window there.

Pre-order The Last of Us at most retailers like Amazon to get the Sights and Sounds Pack as a free DLC bonus.

Immerse yourself in a world reclaimed by nature with this pack containing:
• A digital download of the game soundtrack, featuring original music by Academy Award winning composer Gustavo Santaolalla.
• A PS3 dynamic theme showing Joel and Ellie on their journey through a ravaged city.
• Two exclusive PlayStation Network avatars featuring Joel and Ellie in winter survival gear.

Receive The Sights & Sounds Pack and the GameStop exclusive Survival Pack for pre-ordering The Last of Us there.

Your best chance of staying alive in brutal multiplayer matches, this pack contains:
• Bonus experience points to give you a head start on your rivals.
• A powerful melee attack booster to pack a heavier punch in hand-to-hand combat.
• In-game currency to buy boosters, customizable parts and other items to bolster your multiplayer characters.
• Special customizable items for your multiplayer character.
• Two bonus skins for Joel and Ellie – available once you’ve completed the single player game.

Tips from the Creators

Take a look at the origin and characteristics of the Infected in the first video of The Last of Us Development Diary series.

Explore the game world, the environments, and the concept artistry at work in the second video of The Last of Us Development Diary series.

The third video of The Last of Us Development Diary series highlights crafting and scavenging, and the difficult choices Joel and Ellie must make in order to survive.

There are no other The Last of Us cheats on PS3 yet. So until they are discovered, we made the handy The Last of Us guides listed above to help you with tips and tricks for the game!

Do you know of any The Last of Us cheats or unlockables?
Let us know in the comments, you’ll get credit for finding out. – Thanks for visiting!