Mario and Donkey Kong: Minis On The Move Review 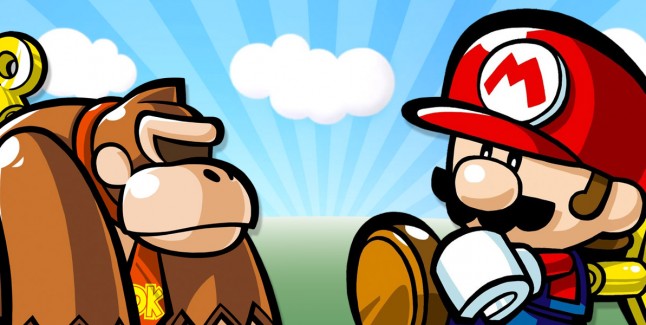 Here is my honest Mario and Donkey Kong: Minis On The Move review of the newest 3DS eShop download-exclusive game in the long-running Mario vs. Donkey Kong series.

Mario and Donkey Kong Minis on the Move is the 5th game of the series and a perfect “waiting” game. What I mean by that is, you know when you’re stuck in a long line or waiting at the doctor’s office? Well, it’s perfect for those types of situations because it not only keeps you entertained, but also magically makes time go by faster! Ok… not really, but it feels like it! 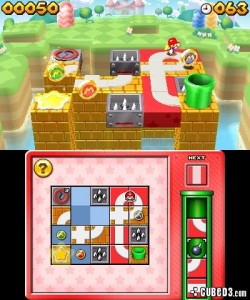 This game isn’t just one big puzzle, it has a set of 4 different puzzle types: Mario’s Main Event (60 levels), Puzzle Palace (60 levels), Many Mini Mayhem (50 levels), and Giant Jungle (3 levels). Obviously the 4 puzzle types are different but they each have a common goal: get your mini to the star. It might sound simple, but it’s not. Not only do you just have to find your way to the star but if you want a “perfect” rating, you also need to collect the 3 “M’s” in the level. If all you want to do is get the star, you could, but you will only get a check for that specific level and less points. The motivation to get more points and stars is so that you can unlock the different puzzle types, more levels, toys, and the mini games.

Pretty much you start off as an adorable mini Mario wind-up toy. It’s placed on a platform with a broken up path and different types of impediments along the path. In Mario’s Main Event, you get pieces of the path (some turning to the left, to the right, vertical, horizontal, etc.) falling down a pipe for you to choose from. It reminded me of Tetris but only because you have to be quick or else the pipe will get full of pieces and will eventually “break”, forcing you to start all over. The further you go, the more options you get. Your goal is to lay down those tiles provided to you on the path so that the mini always has a specific direction to follow. If not, it will end up falling off of the platform or getting skewered by the spike pit.

In most of the puzzles you are timed, so this only adds to the stress of it all. The difficult thing is that you can’t just take your time rearranging the puzzle pieces until you get them right and THEN let your mini loose to conveniently stroll right up to the star. It’s called Minis on the Move because…they’re ON THE MOVE. As soon as you start the puzzle, your mini starts moving down the path, so, if you’re not fast enough and your mini gets to an edge, it will fall (after a few seconds of screaming first of course).

WANNA SEE WHAT I’M TALKING ABOUT? CHECK OUT THIS VIDEO!

Probably the most “laid back” puzzle (and my favorite one) is Puzzle Palace. In this one you already have all the puzzle pieces that you need to form the path on the right. Now, all you have to do is decide how to lay them down so they get you to your destination. If you lay them down wrong, you will run out of pieces and you have to start all over. The cool thing about this one is that there is no timer. You are timed, but it’s not a timer that gives you a specific amount of time before doomsday.

Finally, Giant Jungle is probably the most challenging because it is a larger platform with more stars…and a timer. Of course, you do have floating timers around the puzzle that will give you more time, but still, having to collect so many things before the pipe gets full of tiles, can get quite complicated. 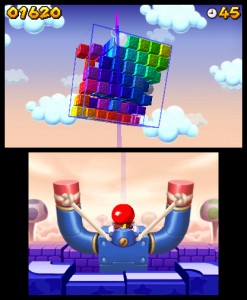 MINI GAMES
The mini games are pretty fun at first but they get very boring after a while. Like the 4 puzzle types, there are also 4 different types of mini games: Mini Target Smash, Fly Guy Grab, Cube Crash, and Elevation Station. Each also has more levels within them but they are unlocked only after you get a specific amount of stars. So, if you don’t have enough stars to unlock level 2 of one of the mini games, you’re stuck playing level 1 until you do. This is why it can get boring very fast because it becomes extremely repetitive.

The toys you earn are more like achievements/trophies. There is really no point to them except for trying to CATCH EM ALL! They are extremely cute though and you could even give them a good shine. They make the funniest noises as well. Especially Toad.

CREATE YOUR OWN PUZZLE!

A cool aspect of this game is that you can Create your own puzzles. You can make them as simple or complicated as you want and then Share them with other players. Aside from you sharing your levels, you can also find and play other player’s custom levels. I thought this was an interesting thing to add to the game but, in all honesty, it wasn’t something that I used very much. I attempted it and as interesting as it was, I just didn’t feel extremely motivated in creating my own level. I think the reason for that is because I’m not accustomed to playing online so I tend to stay away from those online aspects in games.

The mechanics were pretty easy to pick up. I never had a problem with learning the controls/motions (w/ the stylus). I did have a few issues with the bottom screen registering what I was doing at times though. Not sure if that was just my system or what but, sometimes I would do something and nothing would happen. I’d try it again…nothing. It cost me a life or 2 at times.

The graphics weren’t amazing but then again, it isn’t really a game to be judged for its graphics. It’s a Mario game, so, in that context, the Mario graphics were pretty usual for a Mario game. I never used the 3D option so, I can’t judge that. Everything looks horrible to me in 3D.

I liked a lot of the songs that were being used, especially when I heard one of the old school Mario songs. I would have loved to hear more of those old Mario tunes that a lot of us grew up with but, unfortunately, that’s not for me to decide. The new songs were pretty good as well. As for the the noises that the minis make, I found those to be extremely entertaining. Some of them sounded absolutely adorable. Especially Mario’s tiny voice saying, “Oh no…Oh NO!” While others were just hilarious to listen to. Again, Toad…so funny.

There was nothing extremely special about the puzzles. A lot of the ideas I had already seen in different games. They did a good job about putting their own twist to it but still, it did remind me of other puzzle games that I have played in the past.

For me, I played the game for a good while but it would be hard for me to play it over and over again. Mostly because, even though there is A LOT to do, it does get pretty redundant after a while.

The game was fun. Like I said in the beginning, it’s a great “waiting” game because when you’re playing it, you’re so concentrated in what you’re doing that time just passes by so fast. BUT, again, I could only play it for awhile before I’d get bored of it. There were times where I would get so frustrated with a specific puzzle that I would just turn it off. The challenge wasn’t the problem though, it was that repetitiveness that I was talking about that really made me lose my interest. I’m not a big fan of puzzle games, but if you don’t mind repetitiveness when it comes to “waiting” games, then I’m sure you’ll enjoy this game cause there is a lot to do but with limited variety.

Tags: Mario and Donkey Kong: Minis on the Move