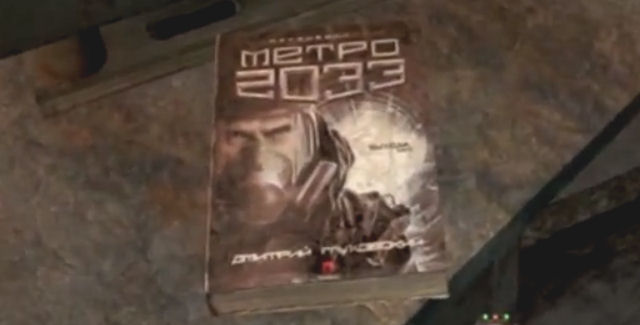 Let’s take a look at some newly discovered Metro Last Light easter eggs! They can be found if you know where to look! 🙂

Easter eggs have been confirmed for Metro Last Light. Watch footage of them all below.

You can find Dmitry Glukhovsky’s “Metro 2033” Book that the game series is based on in Metro: Last Light.

It can be located in the level where you escape prison, make a friend, and must stealth-kill enemy soldiers. It’s at the Officers area on a table, next to a big square machine (could be a radio).

You can find the actual “Metro 2033” Book once more in Artyom’s room.

But there’s more! The “Metro 2034” Book sequel is also in the game sequel, at the cafeteria next to two men playing checkers.

And finally, the “Metro 2035” Book is in the game as well! This video shows you where to find the Metro 2035 in-game poster advertising the real-life book coming out in December 2013. The poster reads: “Prepare yourself for the book that will blow up the entire world – metro2035.com”

The video shows it can be found in the rail-cart rails section where you first encounter the bandits.

You can find a reference to Aldous Huxley’s “Brave New World” Book as an example of the literary nature of Metro: Last Light.

It can be located in the “Bolshoi” Chapter, near the Theater Show where an unemployed theater critic is sitting on the ground begging for money. The first reference is the witty sign next to him that reads “Alms for the man shunned by the Brave New World”; The second reference you’ll get if you give him some bullets and in exchange you’ll get a rant.

At the start of the “Reich” Chapter you are introduced to the Russian Nazi’s plans to rule the metro in a “Nazi Millenium” that kills everyone except those deemed pure by the Reich’s ideology (for example: by measuring captured prisoners skulls). An obvious and sinister reference to Nazi Germany genocide during World War II.

Did you know that the S.T.A.L.K.E.R. team members are in the Metro team? Well, there’s a nice little reference to their history in the game. The stalkers are the official name of outside scouts in the Metro universe.

For example in one part people were saying: “Oh hey its a stalker, no wait its Artyom.”

Have you found any Metro Last Light easter eggs?