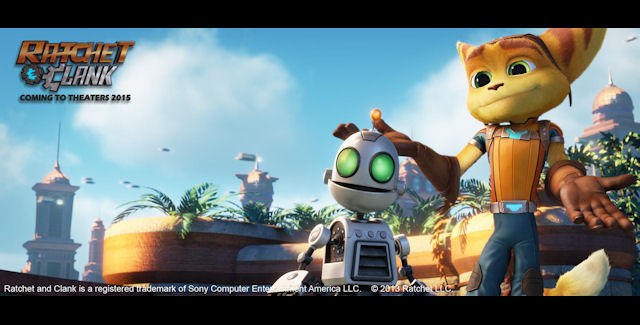 The Ratchet & Clank Movie has been announced by the game series creators at Insomniac Games! The computer animated movie is in development at Blockade Entertainment and Rainmaker Entertainment (of Escape From Planet Earth fame).

The Ratchet and Clank Movie is coming to theaters worldwide in early 2015. The movie’s written by T.J. Fixman, who wrote all the recent Ratchet & Clank games.

You can rest easy knowing that all the voice actors from the games reprise their roles in the movie! The voice actors confirmed so far include: James A. Taylor as Ratchet, David Kaye as Clank, and Jim Ward as Qwark. 😀

“Ratchet and Clank tells the story of two unlikely heroes as they struggle to stop a vile alien named Chairman Drek from destroying every planet in the Solana Galaxy. Ratchet is the last of his kind – a foolhardy ‘lombax’ who has grown up alone on a backwater planet with no family of his own. Clank is a pint-sized robot with more brains than brawn. When the two stumble upon a dangerous weapon capable of destroying entire planets, they must join forces with a team of colorful heroes called The Galactic Rangers in order to save the galaxy. Along the way they’ll learn about heroism, friendship, and the importance of discovering one’s own identity.”

To quote the creators:

Ted Price, Founder and CEO of Insomniac Games, said: “We’ve always thought Ratchet and Clank would be a fantastic all-ages movie and are thrilled our intergalactic heroes will finally get their chance to shine on the big screen. Insomniac is especially honored to play a hands-on role with the film’s production, including the screenplay, consulting on character development and animation, and adding support to the film’s marketing.”

Jerrica Cleland, Director on the Ratchet & Clank movie, adds: “It’s sort of a retelling and re-fleshing out of the origin story.”

For even more information about the movie, check out the interviews over at Forbes & IGN.

Are you excited for the Ratchet & Clank Movie?