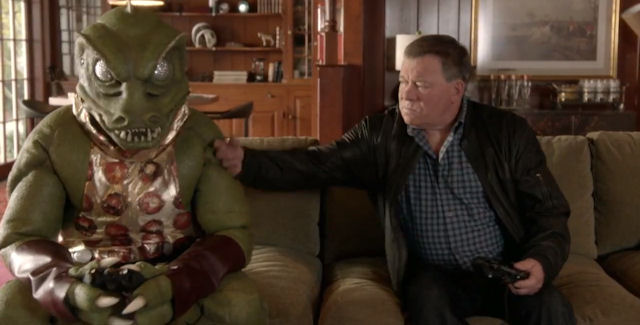 These include DLC weapons such as: The Kelvin Phaser, the Academy Phaser, and the Type IV Stealth Rifle. Together with the other unlockable DLC items, these make up 5 Suit / Gun combos.

Note: The DLC code will be printed on your receipt (so don’t throw that away!), or included in the game’s case, or if you ordered online it’ll be emailed to you. Of course this is only the case if you pre-ordered from participating retailers.

Description of the DLC trailer: More than four decades after they first squared off on an isolated desert planet, William Shatner comes face-to-face again with the menacing Gorn species of STAR TREK fame … but this time the battle begins on a comfy sofa.

Do you know of any Star Trek 2013 Game cheats or unlockables?
Let us know in the comments, you’ll get credit for finding out. – Thanks for visiting!