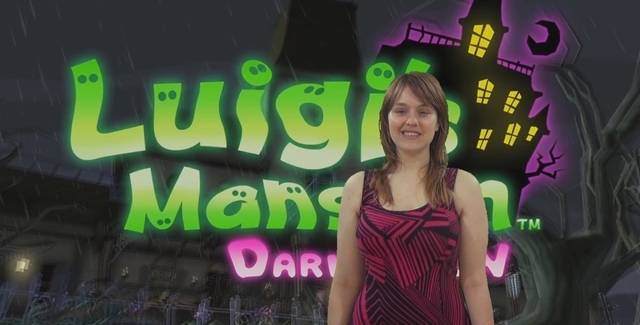 Thanks for stopping by for my review of Luigi’s Mansion: Dark Moon. In this video review I will discuss my impression of the story, gameplay, aesthetics, and audio of Luigi’s Mansion: Dark Moon. I will also reveal what I consider to be the best and worst aspects of the game. Finally, I will give my recommendation of who I think would enjoy this game.

The adorably kooky Professor E. Gadd has enlisted the help of Luigi after King Boo pulls a Kagome and shatters the Dark Moon, which makes all of the ghosts in the land friendly. Now that it’s broken all the ghost go from being Caspers to poltergeists and start running amok. I’m not sure why the professor think the plumber is just the person for ghostbusting, but Luigi begrudgingly agrees to help them out.

I don’t know why he helps the professor because Luigi is obviously terrified of ghosts, but you can’t be brave if you aren’t scared in the first place. The professor guides Luigi through a haunted mansion, helping him find the tools he needs to capture the ghosts and find all the pieces of the Dark Moon. As the story progresses, more challenging mansions become available to explore.

Luigi goes on missions inside of several haunted mansions. He uses the Poltergust 5000 (which is just a fancy ghostbusting vacuum) to suck up ghosts and treasure. The stroboscope flashlight is used to stun ghosts in order to catch them and (for some reason) vaporize bats and rats into money. Using the Dark Light can reveal clues, hidden objects and help solve puzzles. In fact, rather than solving individual puzzles the entire game turns each mission and each mansion into one long run-on puzzle.

The controls of the 3DS are utilized perfectly for this game. Every mechanic feels smooth and adds to the fun of searching for, fighting with and catching ghosts. The battles are surprisingly engaging as Luigi has to quickly charge the flashlight to stun the ghosts and then combat them in a tug-of-war in order to suck them into his vacuum. As the game progresses new ghosts are introduced and the battles become more complicated, often fighting multiple ghosts at one time. Bats, spiders, and rats also pose a threat to Luigi but they can be defeated with a flash from the stroboscope.

Dark Moon developers had the task in front of them of creating a game environment that is both playful and spooky – and they pull it off perfectly. The overall design of the game is dark, but it is punctuated with the bright colors we expect from a Nintendo game. Color is used in the mansions to indicate areas of interest and the ghosts all sport bright colors so that they are easily identifiable and pop out against the background. Playing the game invokes the same kind of feeling one might have in a carnival funhouse, cartoonish and exaggerated but still gives a sense of apprehension about what’s around the corner.

The music is another factor in building suspense, along with sound effects like lightning crashing and rattling and rustling. Is it the wind? Or is it a ghost? The tunes are simple and catchy, without being too repetitive. There is no actual voice acting, and Professor E. Gadd does most of the talking, which is represented by pips in various tones to indicate emotion. I’m not a fan of this method of replacing voices and would have preferred they hire an actor or just leave the text without accompanying sound effects.

The best part of this game is how fun the haunted mansions are to explore and the sheer amount of delightful discoveries that can be made.

The worst aspect is the lack of planning while designing the parts of the game that require the 3DS to be moved around. The key word there is “3D”, which is not a perfect technology that looks terrible if not viewed head-on. So, during these points in the game, I could not enjoy the 3D, which was important to the gameplay because the perspective of the game makes distance hard to judge without the 3D enabled.

The replayability of Dark Moon is one of its strongest aspects because each individual mission can be replayed and more secrets unlocked.

I love Nintendo games for their adventurous fun, but also for their consideration in developing games that focus on gameplay without resorting to cheap violence. I think this one tradition is what truly sets Nintendo apart from other developers that tend to separate audiences into “demographics” and create games accordingly. Dark Moon brushes off labels and is fun for all ages from toddlers to grandparents.

Luigi’s Mansion: Dark Moon is a great start to the so-called ‘Year of Luigi’ and has given me a new appreciation for that mustachioed side kick in green. This adventure game is bursting with fun and the gameplay is compelling and addictive. As I said, this game is appropriate and fun for all ages. Nintendo fans will feel that Dark Moon is familiar but still lighthearted and fresh. Anyone who loves solving puzzles and exploring unique environments will have a grand time, especially fans of Mario adventure games.

So, do you plan to pick up Luigi’s Mansion: Dark Moon? If you already own Dark Moon, let me know your impression of it down in the comments below.