Injustice Gods Among Us Easter Eggs 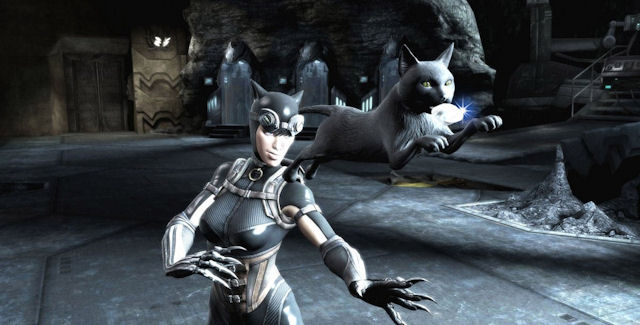 Let’s take a look at some funny Injustice Gods Among Us easter eggs! They can be found if you know where to look! 🙂

Easter eggs have been confirmed for Injustice Gods Among Us. Watch footage of them all below.

Injustice Gods Among Us Easter Eggs

Isis — Catwoman’s pet cat — is playable in one of Catwoman’s S.T.A.R. Labs Missions.

In S.T.A.R. Labs Mission #23 “Isis”, you must play as Isis to sneak past the Gotham City’s Museum guards in order to obtain information on the location of the Batcave. Funny enough, you get 1 of the 3 Stars in this mission for meowing 25 times, which actually happens when you press every of the four main button on your controller hehe!

The mission is shown by the game’s developer at 4:30 minutes into this video:

Trigon — Raven’s father — is the enemy in one of Raven’s S.T.A.R. Labs Missions.
Note: The Martian Manhunter also shows up flying in the background during this Mission.

In S.T.A.R. Labs Mission #180 “Return Of Trigon”, Trigon comes forth to confront Raven directly, father to daughter. Defeat Trigon to prove where your allegiances lie.
Fun fact: Raven’s Super Move will not work during this Mission, since you’re fighting him.

The mission in question shown by the game’s developer at 11:35 minutes into this video:

Lots of the game’s fighting stages have cameos from popular DC Universe characters if you interact with the stage at indicated moments.

S.T.A.R. Labs Mission Example: In a “Sinestro” Mission, Atrocitus — the leader of the Red Lantern Corps. — helps Sinestro by attacking your enemy when requested by the player.

Battle Stage Example 1: “Arkham Asylum” & “Joker’s Asylum”. Two-Face, Killer Croc, The Riddler & The Penguin from the Batman: Arkham Games all have a cameo in the game. They show up in a stage transition from the main hall in Arkham Asylum to the Asylum’s Kitchen.
Also in the similar “Arkham Asylum” & “Joker’s Asylum” stages, The Scarecrow uses his fear-gas to attack your enemy.
Battle Stage Example 2: Twice in “Hall of Justice”.

This video shows all 27 level transitions:

Have you found any Injustice Gods Among Us easter eggs?