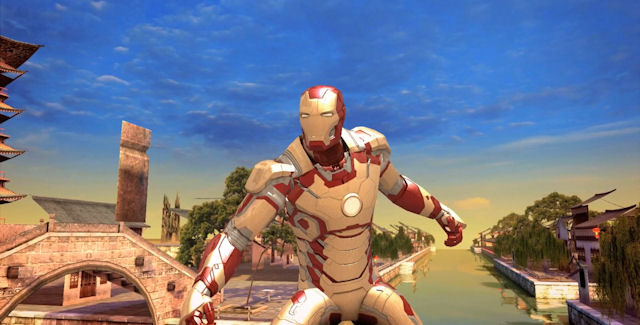 Gameloft has announced they will be bringing the Iron Man 3: The Official Game to iOS and Android mobile platforms. No console or computer version will be released to accompany the Iron Man 3 movie.

The Iron Man 3 movie first hits theaters between April 24th and May 3th, and the mobile game’s release date is April 25th, 2013. So if for example you live in the USA, Canada or UAE, you can play this game a week before the movie.

Compared to their heavily-criticized Iron Man 2 movie-based game, this time around the developer has switched the genre to an endless runner / shooter.

Description: “Become billionaire Tony Stark as Iron Man in this fast paced endless runner and fight the AIM around the world to prevent their dark schemes from succeeding.
Grab your Arc reactor & suit up for an awesome run! Soar through the streets and waterways of Santa Monica as the iconic Iron Man.”

Will you be giving the Iron Man 3 mobile game a try?